It’s that note taking, list making, reminder service offered by Google, which perhaps has lost a lot of the momentum and publicity that it once had. It seems from the people I’ve spoken to about it, that “I’ve already got an app to do that” is the common response when you speak to people about the capabilities of Google Keep. Interestingly however, most people that are using apps to handle the capabilities of Keep are using two (or more) to achieve what Keep does on its own.

I know I regularly am away from a PC and think “I’ll have to remember xyz” whether it’s a task that needs to be completed, a website to check out later or yes; stereotypical “call Mum”. A simple tap of the mic on your Google Search if you run that in your home screen or in Google Now, and you can take a note. Using the voice command “take a note” your phone will take your following statement and change it to a note in Google Keep.

Last chance to alter the note

As the note appears in Keep

While the practicality is more suited to longer, more complex structures than what is displayed below, the voice memo feature is extremely helpful if you need to refer back to something later. It could be a reminder for yourself, it could be something you just know that voice recognition won’t pick up (I see this regularly working in the Health sector) or simply you’re too lazy to type it yourself…

You can open the Google Keep app, hit the microphone button and record a voice note for yourself, then as required adding reminders based on location, time or neither if you simply want to be able to refer back to the memo at a later date and time. If your note is something you need to be reminded of at a specific time, you can open the voice command with “Remind me”. This is where the beauty of tracking your location with your Android device comes in handy, reminders can be time based or location based; so “remind me at 4pm to pick up milk on the way home” will trigger a notification on your phone at 4pm. Or “Remind me when I’m at XYZ shops to pick up milk” which will remind you when you’re next at that Geographical location.

One of my biggest personal annoyances with some of the apps that do cover note taking, reminders or memos is that they don’t have any archiving functions. Once you complete a task, unless you use an app like IFTTT to archive them into another service like Evernote, they’re gone and I mean GONE. No way to refer back to old tasks or reminders and unless you’re quick, even reinstating a task that you’ve accidentally completed can be difficult or impossible. Google Keep has an archive option, rather than deleting a task you simply archive it and it’s stored until such a time as you delete it. Easy to refer back to and reinstate tasks, reminders or notes if you’ve accidentally deleted/completed them. 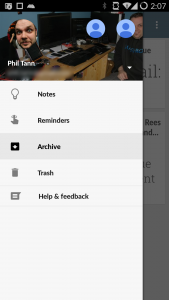 There’s a lot of apps out there that can do a lot of very cool things, but it’s important to remember that there are often free alternatives which can do just as good a job as the paid apps. Google Keep, being a Google released product syncs your data across devices as well as having a desktop (Chrome Extension) available to make your life easier. Don’t forget the simple options when you’re looking to solve a problem in your digital life.

Have you got any tips for the Ausdroid community on using Google Keep better?

Keep is in desperate need of a native tagging/labeling feature (colors don’t work for the colorblind). Until it has that it’s not usable to me and I’m stuck with Evernote.

I much prefer Evernote, it does more & is available in more places.

On a Z2 I can’t seem to add a Google Keep note with a reminder via Google Now voice commands. This article seems to suggest it is possible… is it?

I use keep for all sorts of things. Love it

I use keep daily. I use it for keeping notes and stuff at work when I go out on jobs. I like it because its easy, there’s no extraneous bullshit. it just does what it says on the box. And the website is also clean and easy to use.

I love using this as i share and sync notes and lists between me and my wife by adding her to the keep, just try feature

It’s worth noting that you can switch between your work list, or any other account *in app*. So if you don’t like to mix your business with pleasure, you can separate the interests with Keep.

I love the suggestion of using Keep as a Read Later service through Link Bubble. Totally stealing that idea @Peter Massey

I use it every day, for work and more.
Why is it good? Because it does a few basic things and not much else.
Evernote requires a special sort of investment wheras with Keep I get bright colours and don’t have to think at all.
You know its so good that half the time I can’t even remember its name.

I love Keep. I’ve bounced around Wunderlist, Evernote, etc, and I’m happy with this one. Though I do have some lingering issues.

-No iOS app. I also use an iPad and would like the ability to add things to existing lists.
-The web (Chrome) app is… okay, but there has to be a more elegant solution. It just opens a new Chrome window in the middle of your screen and I’m getting weird syncing issues.

I use it as my main note keeper but it would be nice to link reminders to calendars and tasks. It also needs to ability to sort in categories or folders.
As such for longer notes I’ve had to use Evernote.

I use it as my go-to notes app. Don’t know why I like it more than Evernote and others, but I just do.

I just wish we could label the notes. Say I want a note with ‘friends’ on it, then I can click the label and it’ll show me all of the notes I’ve written down that have been tagged with friends.

Inbox has really taken the place of where I keep my reminders (although the keep and inbox backend is probably the same anyway). In any case keep has been dormant on my phone for quite a while now interestingly.

Its garbage, you can’t even organise the notes, Evernote while not perfect is a billion times better.

I’m assuming you mean in groups/categories – because you can reorder your notes. I definitely think having groups would be a nice addition if implemented well (hopefully they add it) – but it seems they’ve just focused on making the app as simple as possible to use at the cost of some more advanced features.

I use this on a pretty much daily basis. Shopping lists to random notes about the kids.
Only thing I actually miss from Evernote is the ability to encrypt notes securely.
Mind you I recently subscribed to LastPass, I can use that for secure notes now.

Another Google Keep fan here! Thanks for the tips re voice actions. I’ve been meaning to look it up since I got my LG G Watch. There a number of improvements I’d love to see included, for example: * Ability to recall the pre-defined locations of “Home” and “Work”; * Ability to label the colour dots. I always forget what colour I used for what purpose, e.g. shopping lists, home todo, work todo, saved for later, etc. * Add more colour options for the dots! * Better integration with other Google services. One I’ve love to see is with Gmail… Read more »

Yes, you are right! I was referencing the wrong app …

Yep, I’m with you. I use it all the time. My wife and I can now have a shared ‘check-off-able’ shopping list. Very handy!

I just got paid $17500 working off my computer this month. And if you think that’s cool, my friend has twin toddlers and made over $18k her first month. It feels s0 g00od making so much money when other people have to work for s0 much less. This is what I d0…..

Same. Now if training the partner to use it, was as easy as using it. :/

I use the “Our Groceries” app for that. my wife has it on her iPhone. It syncs well and has all the features you need for a shopping list. But for something free that’s not needed on iOS, Keep is a good option.

Use Google Keep daily. Syncs to all the things!