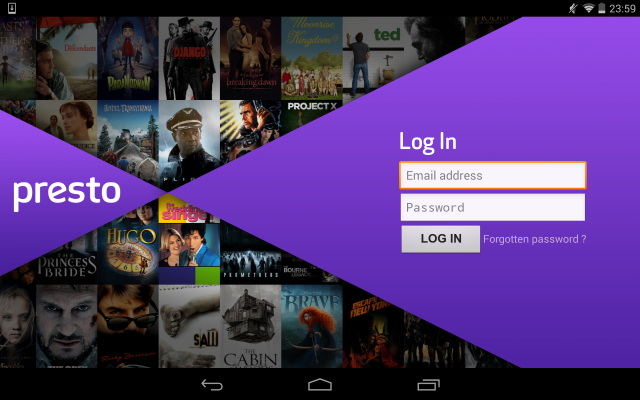 Presto, the Australian Foxtel-owned movie streaming company, has announced that its new Presto TV service is now available on Android. An update to the Presto app now delivers TV series alongside its existing Movies if you’ve subscribed to Presto TV.

“Better late than never” is a phrase we’ve often heard in relation to app releases on Android, and this seems to hold especially true for Australian streaming video apps. Presto TV actually launched over a week ago on iOS and desktop, but for some reason the update to the Android app took an extra ten days.

As a bonus for our wait, the app is now compatible with the Nexus 9 and the company continues to support Google’s Chromecast for streaming content on your TV. What hasn’t changed though is the device classes supported by the Presto app – it’s still a strictly tablet-only affair. That said, its not very picky about its tablets – even though there is a compatible devices list (which needs updating) even “tablet mode” devices like the Neo X7 are able to install the app from Google Play.

Presto TV is a joint venture between Foxtel and SevenWest Media, so you’ll find shows like Packed to the Rafters and All Saints alongside HBO and Showtime series like Dexter, Californication and more. There’s also a selelction of Foxtel’s own shows like Wentworth and Love My Way and a number of ABC shows like Rake, We Can Be Heroes and Ja’mie Private School Girl. Despite the joint venture, there’s probably a little less Seven content on there than you’d expect.

Of course, the crown jewel in the streaming TV landscape – Game of Thrones – is nowhere to be seen despite Foxtel’s exclusivity on the series.

Presto TV costs $9.99 a month. If you’re already subscribing to Presto Movies, you can bundle the two together for a discounted total of $14.99 a month.

Are you a Presto customer? Will you be subscribing to Presto TV? Tell us in the comments!

Dafuq? Tablet only? How bizarre.

Was that via sideload?

No. That was via Google Play.
Why should I need to sideload when running a very common phone with the semi-latest version of Android?

Because developers are usually lazy and only block installation from the play store. Side load and it has a decent chance of working. Unless they let you install it, then inform you that it’s incompatible. That’s the laziest thing ever.

At first I thought you meant that TV was being included in the Presto subscription. It’s a lot extra for TV.