Home Mobiles Galaxy S6 possibly taken for a run through Antutu with Exynos 7420... Samsung’s Galaxy S6 is almost certainly going to be announced at Mobile World Congress in Spain at the beginning of March, so it’s no doubt nearing completion. With a phone almost ready to unveil, it’s no surprise that someone has put the phone through it’s paces on Antutu, and from the looks of it, the phone is ready to compete with the best.

The spec listing is one of the big pieces of news, with an Exynos 7420 processor apparently powering the phone instead of the Qualcomm Snapdragon 810 CPU. It’s not terribly surprising to see the S6 powered by their own silicon, with the fairly public issues that Samsung has claimed they’ve had with the Qualcomm processor.

Other specs listed include 3GB of RAM, 32GB of storage and we assume based on previous Galaxy S phones that a microSD card slot will be included as well. The screen will be a relatively small 5.1-inches with a QHD 2560×1440 resolution, powered by a Mali T760 GPU.

The Galaxy S6 – Model SM-G925W8 – has a 5MP front-facing ‘Selfie’ cam, which may possibly mimic the Note 4 wide-angle selfie cam. The rear mounted camera will see a jump up to 20MP, which we hope will also include Optical Image Stabilisation (OIS) like the Note 4 as well.

Software wise, Android 5.0.2 is listed, and if rumours are true, we may see a lighter, more toned down version of Touchwiz delivered with the S6. There’s also a comparison of the Exynos 5433 and the 7420, which shows that the 7420 could have some decent results when put through it’s paces. The benchmarks don’t necessarily mean much given Samsung’s history with Benchmark gaming. 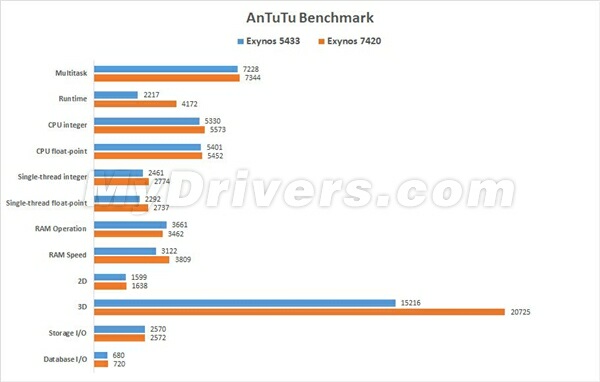 Whether this model is the Galaxy S6 proper or the rumoured S6 Edge will have to remain a mystery until the March 1st unveiling.

Except 3D everything else seems very similar to the previous Exynos.

The only thing exciting is the 20mp camera