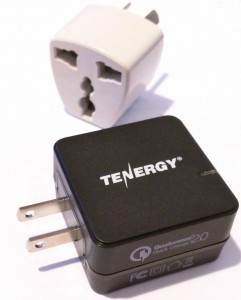 By now we all know that the Nexus 6 shipped in Australia minus the turbo charger that accompanied it elsewhere in the world. We were told by Motorola that it would be delivered to customers mid Q1, 2015, ie. last week. A couple of weeks ago those purchasing a Nexus 6 from JB Hifi were happily surprised to find a turbo charger in the box and the next day we were told by Motorola that the turbo chargers would begin shipping to customers last week. Seems a long time to wait doesn’t it.

Back in mid January I decided that I couldn’t wait anymore so I purchased a Qualcomm Quick Charge 2.0 compatible charger from Amazon, not really sure if it would work or not. It comes with US AC prongs and as such required a standard AC adapter (purchased from eBay for around $1 a few years ago) which made me wonder if it really would work.

I am happy to report that it works perfectly. I am able to charge my Nexus 6 from a low level to near full in only a fraction of the time as previously required with a standard charger. The charger itself is a well made piece of tech which feels solid and not cheap and has a charging light on the side of it. All that is included in the box is the charger, no USB cable so you will have to supply your own. The charger has dropped in price since I purchased mine and is now $16US, plus $7 shipping. If Australia Post don’t misplace yours like they did mine you could have it in your hands within a week. There are many Qualcomm Quick Charge 2.0 compatible chargers on Amazon but very few ship to Australia. The company selling the Tenergy charger was one company that did ship to here. The Tenergy charger looks well built and is a quality product. 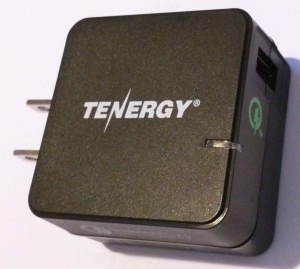 For many, even if your phone supports Qualcomm Quick Charge 2.0 technology, unless it is a Nexus 6 it would not have arrived with a Turbo/Fast/Quick charger. Maybe you do have a Nexus 6 and are sick of waiting for the charger from Motorola or you just want a second one for work/home/elsewhere. If this is you then I can recommend buying this product. It is not cheap when it comes to chargers (more than a $2 USB cable) but it certainly works as advertised giving precious hours of usage with only a few minutes of charging.

Qualcomm Quick Charge 2.0 chargers are compatible with the following devices:

The list can be seen on Qualcomm’s website so if you are unsure check out the website and if you want one Amazon has plenty of them to offer. The lack of AU AC prongs should not be a deterrent as it will still charge as fast as advertised with the addition of a simple AC adapter.

I can highly recommend the Tenergy Adaptive Fast Charger for those wanting to take advantage of Qualcomm’s Quick Charge 2.0 technology.

Turbo charger for N6 finally arrived for me too. Can’t wait to test it out. S/E suburbs of Melbourne.

Finally got the promised turbo charger from Motorola. No special box or USB cable included. Just a plain small white box with a bubble wrapped charger inside. I have pictures here. Extra USB cable would have been nice but it’s here finally.

SLightly off topic but whats the quickest way to charge a Nexus 5?

Yianni soc
Reply to  Will Dutton

Late reply but.. A charger with a 5V/2A output is the best you’ll get for the Nexus 5 as it doesn’t have the Qualcomm Quick Charge mentioned in the above article.

This will do the trick: http://shop.ausdroid.net/epages/shop.sf/en_AU/?ObjectPath=/Shops/ausdroidshop/Products/ETA-U90HBEGXSA&ViewAction=ViewProduct

Will Dutton
Reply to  Yianni soc

I have so, so many micro USB chargers kicking around from all the devices (tablets, phones, chromcast, mobile 4g modem etc )I could start an eBay store .

Just called Motorola customer support to enquire about ETA on the turbo charger. Oh man … I hope to never call them again. Whatever voip service they use, I could hardly hear her. She made me give all my detsils (name, DOB, imei number, phone number, address etc) just to ask “When is the charger shipping?” She says “Because of electrical standards blah blah”. I say ” when is the turbo charger shipping. I’m traveling to Europe for 2 months in the next 3 weeks. Id like to know when it’s shipping”. She replies “Sorry, I don’t have that information”… Read more »

Will you be using it every night as primary charger or just for quick boost at times when needed, I am wondering if I should get it considering that some people have suggested battery will degrade quicker and I am not sure if its suited as a primary charger (Moto X)

I doubt it would be great if you used it all the time but I plan on using mine for the quick top ups when required. I use a qi charger overnight.