Exclusive: Google is working on a new feature for Google+ aimed at social networking foodies called Tablescape. The service is a combination of Yelp reviews and Instagram photos, specifically designed for food, both home cooked and found out and about. The new feature is aimed at ‘people who pull out their phone before picking up their fork’ and is currently in trial with Google+ City Experts, the program which encourages every day users to explore their city and rate and review venues on Google+ and more recently Google Maps.

Android Police first latched onto rumours about this in their post this morning, but a City Experts user who is trialling the service has sent in a number of screenshots of the app in action in Sydney and has shared a little more information about the program.

Tablescape is a way for foodies to share their food experiences within selected cities (Sydney being the only current one for Australia at the moment), with pictures offering a number of features which will highlight food venues throughout the city. The features on offer include :

Tablespace runs as a standalone app, but definitely has a link to Google+, with the onboarding process warning that ‘All posts, comments and +1 live in a public Google+ Community and could be seen by anyone in the world (but only testers have this app)’.

The app is very much in a trial at the moment, with only ‘Google Trusted Testers’ in possession of the app. It’s a great looking app, with Material Design elements and a similar overall design to Google+. The app opens onto a stream of food related posts hashtagged and ready for your perusal. The slide out nav drawer opens to show a range of options including options to Explore which opens a map and shows nearby locations, see a ‘Dish of the Day’, Featured dishes and of course your ‘Foodographs’.

There’s a link to the Tablescape community in Google+, as well as some settings which at this stage just let’s you change your city location.

Adding a new post is similar to adding a new photo to many other social networking applications; you can either take a new photo or use an existing one from your gallery. Once a photo is selected, you can make edits to it as needed, as well as labelling the photo you’ve taken, putting in your review of the dish, and selecting from a number of labels including Homemade, Vegetarian, Naughty, Alcohol, Chocolate, and dozens more. It’s very thorough, and very smooth.

Overall, Tablescape is a pretty awesome concept and marries up people’s love of taking pictures of their food and foodies love of sharing their experiences. Exactly when we’ll see a public launch of Tablescape isn’t clear, but the app and sharing seem very close to complete from the looks of it.

Update: When asked about Google Tablescape, Google Australia’s spokesperson told Ausdroid that the only Tablescapes around him looked like this: 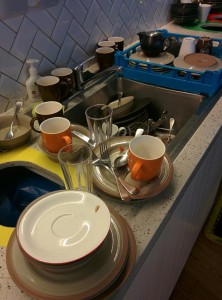 We appreciate his honesty, and we look forward to some tidier tablescapes from Google Australia soon 😉

Via: Rumour from Android Police.