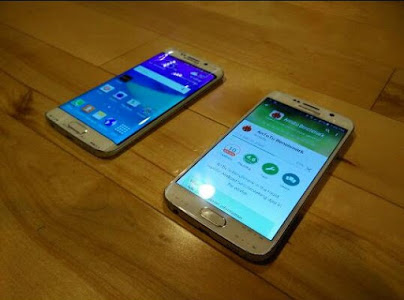 With only a few days until Samsung announces the latest instalment of the Galaxy S line, it appears that the cat is out of the bag. Images are popping up all over the Internet showing the Galaxy S6 in all it’s glory, so we decided to pop them all into one post so you can decide for yourself: real or fake?

All images are coming via a thread over on XDA Developers where a user claims to have received what appears to be a Galaxy S6 prototype as part of his job. The images show markings on the phone that can identify the phone and thus you will have to forgive the strange overlays on the images.

The leaker has also provided information about how the phone feels – he says it’s extremely solid, has a glass back (that’s the sound of Dan flipping a nearby table, if you were wondering) and it runs Android 5.0.2.

Of note is the finger print reader on the front button is no longer activated with a swipe action and is now just a press, corroborating rumors that Samsung has changed the hardware in that front.

Also notable? The lack of a removable battery, and a curiously absent SD card slot. If you’re worried about storage then fear not – the Galaxy S6 will reportedly come in a 128GB variant. That should be enough to satisfy even the biggest hoarders of media.

The phone is said to come in blue, gold, white and black colours. These sizes and colours apply to the S6 Edge as well, as seen below.

We will have to wait until Monday morning to see if these images are corroborated during Mobile World Congress 2015. Fear not though, Dan is on the ground in Barcelona, ready to bring us any and all official information the minute it breaks.

What do you think of these images? Is Samsung on a winner with the S6? Is this even the S6 / S6 Edge? Sound off in comments!

I believe these photos are fake. It doesn’t even look like he is even holding the phone.

Surely the bottom of this phone is not legal. iPhone 6 direct rip off – not even trying to hide it.

This has to be fake? Are Samsung that dumb?

Even the whole frame in general actually.

Without microsd slot and removable battery they’ve lost this customer. Like all previous releases of the Galaxy line, how many of the large storage models ever made it to our shores?