Sony has officially brought two announcements with it to Mobile World Congress 2015. The slim and light Xperia Z4 Tablet and the midrange Xperia M4 Aqua are today getting their time in the Barcelona sun.

Sony’s announcement is notable for what it’s lacking, too – we had assumed we’d see the Xperia Z4 announced at MWC, following on from the last couple of years. While we’re definitely onto the “4” in Sony’s series now (actually their 5th generation), the actual flagship of the line is curiously absent.

Sony’s had a great reputation for building slim and light tablets in their Xperia Z series, and the Z4 looks to be no exception. Replacing the Z2 Tablet, the Z4 Tablet is a super thin and super light (6.1mm and 389/393g) 10.1-inch tablet with a 2K display, powerful internals and 17 hours of battery life on video playback. It’ll be available in black and white, with Wi-fi and LTE models on offer.

While you’re enjoying those 17 hours of video playback, you’ll also appreciate the front-facing stereo speakers that can pump out a surround sound effect and can adapt to different types and styles of headphones.

There’s an 8MP rear camera that Sony says offers great shots in all lights, and a 5.1MP front camera with a wide-angle lens.

Inside you’ll find Qualcomm’s Snapdragon 810 64-bit octa-core processor with 3GB of RAM. There’s a 6,000 mAh battery, 32GB storage and a Micro SD card that supports up to 128GB of extra storage. Android 5.0 Lollipop is of course running the show, and it’ll be interesting to see whether Sony’s apps are customised to embrace Lollipop’s Material Design.

PS4 Remote Play is on offer, alongside Sony’s High-Res Audio. As we’ve come to expect from Sony’s Z-series devices, it’s IP68 water- and dust-proof though the USB port is – as expected for this generation – left exposed on the outside edge. Sony’s also saying there are printer and projector outputs on the Z4 Tablet, presumably these are tucked away inside covers.

Sony’s giving Z4 Tablet owners access to “Xperia Lounge Gold” – Xperia Lounge is an app that Sony uses to push content to owners and fans of their products, so the new “Gold” designation might imply a new level of service on offer.

There’s also some accessories available, with a productivity focus this time around. There’s a dedicated Bluetooth keyboard that transforms the Z4 tablet into an impressive laptop-style form-factor while still remaining slim and light, a variable angle “perfect fit cover” for typing or viewing media and a smart speaker for conference calls and voice commands. Check out the full specs on the Sony Mobile site. We saw some leaked photos of the M4 Aqua crop up in the last few days, so it wasn’t too surprising to see it announced this evening alongside the Z4 tablet.

Sony’s taking clear aim at the mid-range with the M4, and making no bones about doing so with the company’s own announcement tweet claiming it’s “setting a new mid-range standard”. The company wants us to know there’s “no compromises” in their approach, and it’s hard to argue with that as the M4 brings Sony’s well-regarded “OmniBalance” design, quality internals with 4G LTE connectivity.

The M4 Aqua has a 5-inch 720p display on the front, flanked by a 5MP “selfie camera” with an impressive 88-degree field of view.

On the back you’ll find a 13MP camera on offer, powered by Sony’s Exmor RS sensor and sporting an f2.0 aperture. It can drive its light sensitivity up to ISO 3200 and Sony’s excellent Superior Auto mode should make driving the camera a snap.

Inside there’s Qualcomm’s Snapdragon 615 processor, which has been cropping up in a number of midrange devices in the last couple of months. It’s been paired up with 2GB of RAM and 8 or 16GB of storage along with a Micro SD slot that can take up to 32GB.

There’s a 2400 mAh battery inside, and Sony says you’ll get 2 days out of the phone – that’s using it’s Stamina battery saving mode, but it’s still an impressive figure.

As you’d guess from the name, it’s also dust- and water-proof, with an IP65/IP68 rating. The Micro USB port is, like the Z4 Tablet, open and uncovered which will be fantastic for those of us sick of opening the port cover on the Z3.

It’s also a little early for the M4 Aqua, with an 80-country launch party awaiting the handset in “Spring 2015” (we’re assuming that’s our Autumn, so any time between now and the end of May).

Price has been set at “around 299 EUR”, which in Aussie dollars comes up to about AU $429 – that might drift upward to $449 or $499 by the time the phone gets released here. The phone will be available in White, and Black, with a “Coral” colour and Silver also on offer. The Silver version hasn’t yet been pictured, and it looks like the “Coral” colour might have been named “Rose” at one point.

Check out the full specs on the Sony Mobile site. 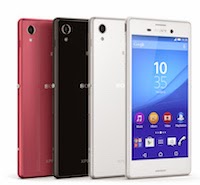 Sony is hosting a number of Australian journalists at a breakfast event tomorrow morning, where we’re hoping to get a look at these new beauties. Dan will also be taking a tour of Sony’s booth at MWC, so we’ll have a hands-on report for you as soon as we can from one event or the other!

Gah, i love the hardware but their themes just don’t do it for me.