Sony this morning hit the high note with the Xperia Z4, but they could have another hit on their hands in the mid-range market with the Xperia M4 Aqua. Sony has introduced the phone as the first in what they call the ‘Super Mid-Range’ offering a more premium product without having to head into their Z range pricing. 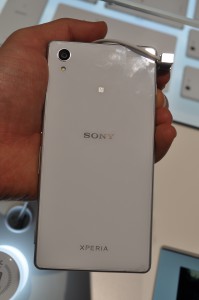 The phone feels great in the hand, there’s a small feeling that you’re missing out on the premium glass backed devices in the Z3 family, but it’s a price-sensitive product and the plastic is a worthy replacement and fits in with the waterproof IP65/68 nature of the phone.

The phones trim holds all the ports such as the microUSB, microSD and SIM card slots – which are obviously hidden behind covers for waterproofing. Though it’s a lower end phone, Sony have still included all the trimmings with the separate camera button, as well as the usual Volume rocker and power key.

The camera is a fairly decent 13MP sensor, but we really need to get this into the wild for a closer look. If selfies are your game, the 5MP sensor on the front will do.

The phone is actually fairly responsive thanks to the 64-bit Qualcomm Snapdragon 615 processor inside and though it only has 2GB of RAM inside that’s more than enough for a smooth user experience. There’s quite a lot of Sony apps pre-installed just as we saw on the Xperia Z4 Tablet, but again, it’s a fairly stock Android 5.0.2 experience and handles quite nicely.

The Xperia M4 Aqua will cost around €299 which should hit the $450-$500 price point here in Australia but it makes for quite a decent top end mid-range phone.

Way too expensive for for a midrange phone. I high-end phone costs around $700.
$350 is more appropriate for a phone of those specs.

especially given that you can grab a z3 compact for ~$500 from kogan. then again you can usually get sony phones for well under their suggested price so the m4 might end up cheaper.

Looks really nice and its waterproof.

Daniel, if Ausdroid is attending the Barcelona show as a guest of any company – be it Sony, HTC or Samsung – then you should have a declaration of this at the end of any report filed from Barcelona. Doesn’t matter if you’re writing up a Sony device but are an all-expenses paid guest of HTC for example, it’s all about the transparency. SMH, AFR and News do this, shouldn’t Ausdroid also be transparent in the same way?

Dan’s not doing this. He’s not paid to be there.

It’s not about being paid to be there or not, it’s about having a company pay for your airfare and accommodation. That’s why disclosure is important, and not only for stories written about that company and its products (which Dan has done) but for all stories generated during that paid-for trip.

If you read the review of the HTC VR goggles, that declaration was made in that article. I don’t know if it has to be at the bottom of all the articles.

“I don’t know if it has to be at the bottom of all the articles.” It should be, even for an article about Samsung, Sony or other other competitor. That’s standard practice among media, see articles from The Sydney Morning Herald and The Australian Financial Review as examples, every story from Barcelona carries the declaration of which company sponsored their travel.