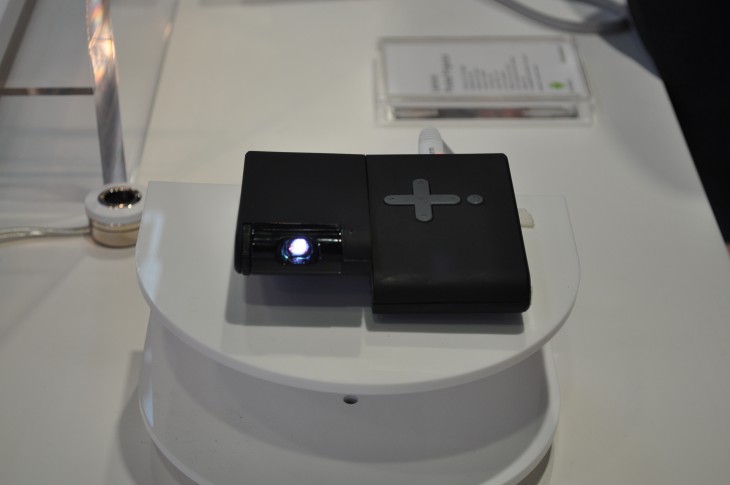 Lenovo launched a couple of cool media focused tablets at Mobile World Congress, but that’s not the only media related product they’ve announced. Lenovo has announced they will soon begin selling a Miracast and DLNA enabled pocket projector.

The Lenovo Pocket Projector is specifically designed with smartphones, particularly Android phones in mind – though it will work with iOS and Windows 8.1 – with the slogan ‘Project Life Anywhere Using Android Devices’. The projector is a take anywhere device which allows you to either wirelessly transmit media through DLNA or Miracast, or play it back from a microSD card inside the unit and cast it to any blank surface.

The projector can throw an image up to 110″ to a wall or flat surface with a resolution of 854×480, in 16:10 or 4:3 aspect ratio to immediately display your videos, pictures or even a presentation. The picture is quite bright with a ’50-lumen high contrast optical engine’, in practice the projector is actually quite good even in a fairly well lit room. In a demo I saw the projector working in the dark which is definitely optimal, but it can work in a lit room. Sound wise, the projector has a dual-speaker built-in to the unit, but it also has a 3.5mm jack at the rear to allow you to plug in a set of speakers which would be optimal if you’re watching a movie with it. The projector is powered by microUSB, but has a battery inside which can last up to 2.5 hours – or almost one whole Lord of the Rings movie. The unit is a split system with the optical engine able to be tilted and moved into position for optimal coverage. The hinge on the Pocket Projector will actually allow you to point it up 90° to the ceiling if you want. While pocker projectors aren’t terribly new, it’s still a neat concept done very well by Lenovo and has applications for both business and personal use. The Pocket Projector will begin shipping in the US this month for US$199, Lenovo are looking to bring the Pocket Projector to Australia, with local pricing and availability to be announced closer to launch.

Could you use a Pocket Projector?

Can’t wait to get my hands on this. As an app developer this would be perfect for demo’ing my product!