Wireless charging first really came to prominence in the Android arena when Google and LG included the Qi wireless charging standard as a feature on the Nexus 4. While Android fans in the US had a number of options to choose from, here in Australia we scrambled to find Qi chargers. The main source of early Qi chargers were those imported from Chinese manufacturers. These early imports were, and still are to a large extent, quite low-quality ugly devices, so there’s certainly room in the market for a higher-end up-market Qi charger – enter the Aurora Qi Wireless Charger from premium design company Aerios.

Aerios is a Sydney based company who first came to prominence when they announced the beautifully designed Moduul dock for the LG G Watch and subsequently the G Watch R. Their products look great, use high quality components and even come in some pretty nice packaging. 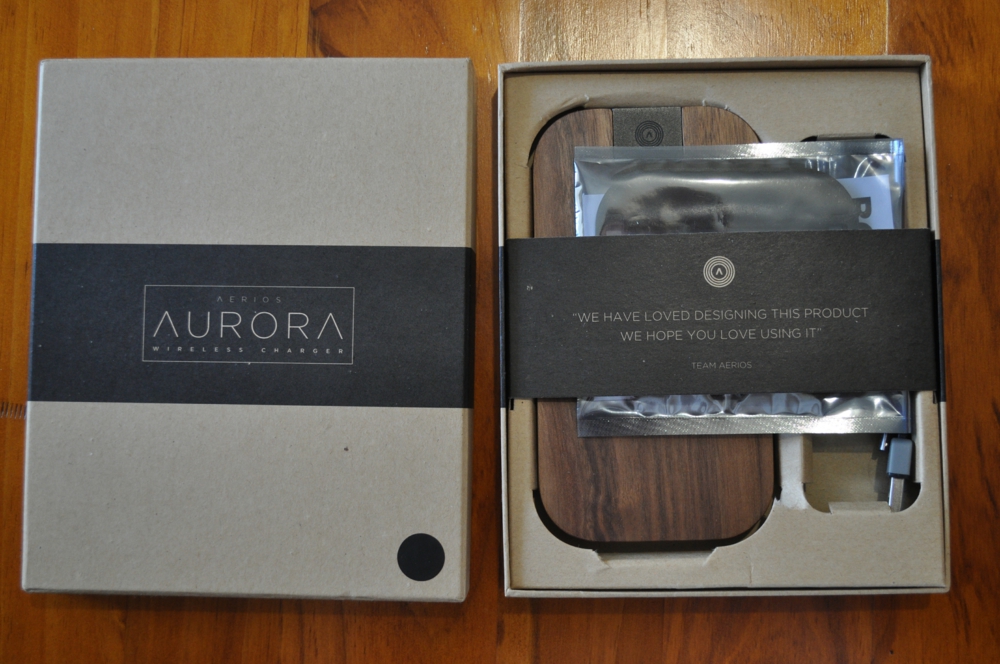 The unit itself is in a word all class. The Aurora is not your cheapie plastic import Qi charger designed to be hidden away, it’s a stylish piece of equipment you can keep on your office desk that will blend in with the other acoutrements of a working desk, or sit nicely on the bedside table to charge your phone while you sleep.

The Aurora has a dual form factor, offering the traditional flat pillow style we’ve come to know in Qi chargers or with the aid of a bonus accessory it can sit upright to act as a desktop stand style charger. The upright stand is an easy to assemble, simply sliding over the length of the dock to sit around a quarter of the way up from the bottom to easily tilt the Aurora to a pleasant angle allowing you to view your screen while charging at your desk or as a bedside clock while you sleep.

There is a small niggle I have with the design and flow of the USB cable, while using the charger as a desktop stand. While the included accessory has a channel for the flat USB cable to run through, the actual setup of the cable isn’t terribly intuitive. If you want to see how it’s supposed to be setup, then here you go:

The Aerios Aurora Qi Wireless Charger is a new product from the Aerios team, featuring Australian sourced Oak or Walnut finished with ultra clear lacquer sitting atop an anodised aluminium base. The finish on the timber is plainly well thought out and offers a smooth, yet slightly grippy surface without being tacky or sticky to the touch. Overall It seems to be quite durable, but then it’s a phone dock not a chopping board.

The timber front of the charger merges neatly into the anodised aluminium base, there’s very little if any appreciable seam to be found between the two layers. The aluminium base has a rubberised foot encircling the unit to ensure that it won’t slip or move when you’re using it. It does tend to pick up dust, but being on the base or faced away from you in desktop stand mode, this doesn’t present an issue. While the flat USB cable is supplied with the charger, you will have to supply your own power source – 5V 1500mA -for the Aurora. The dock will if powered correctly, supply 1000mA output with 75% conversion through triple coil charging hotspots. The triple coil hotspots are the key to the docks ability to easily charge any Qi compatible phone, with the ability to supply inductive charge up to almost a centimetre from the coils, that is unless it’s a Nexus 6.

I ran through a variety of Qi compatible phones on the Aurora – Nexus 4, Nexus 5, Nexus 6, and LG G3 and only the Nexus 6 with its overly curved rear presented any issues, but it too began charging with a small re-position. The rest of the test subjects were a breeze to simply lay them on the charger without even attempting to line it up and charging started immediately.

Charging is a little faster than memory serves from the early days of the cheap plastic imports, heat dissipation too is improved with the phone recharging quite happily without overheating and turning off.

The Aerios Auroroa is available now in Silver/Oak or Black/Walnut colour options for $95, or with a Wireless Charging card to transform your non-Qi capable smartphone into a wireless charging beast for $108. Both bundles include the attachment which transforms your Aurora into an upright desktop stand.

For Australian customers you can order an Aerios Aurora Wireless Qi Charger from the Aerios website, if you’re in the US then head on over to the Aurora prodcut page on Amazon to get your order underway.

There’s always an air of hesitation with what some people deem a higher priced accessory, but in the case of the Aurora Qi charger, the price is warranted for the build quality, technology included and the elegance of design of the product as a whole. It’s also refreshing to see high quality accessories being designed with Android handsets in mind.

There’s no ifs, ands or buts about it, this is a great Qi charger offering a fast top up when needed without having to worry about plugging in any wires, and it suits the decor of both my home office and my bedside table, which keeps my wife happy.

There’s no question in my mind as to which Qi Charger you should be purchasing if you’re in the market, the Aerios is it.

Edit: We love the Aerios Qi Charger and it’s now available to order from the Ausdroid shop.

tried it with my nexus 6 with and without case.
without case it takes a long time to charge. i left it on the charger with 15% and came back to it 5 hours later to see it at 70% or so.
with a sgp case it went from 20% to 45% or so.
how are the charging time with yours on the nexus 6?

How does this go for charging two devices at once? I’d like something that can do my S5 and moto 360, so I only need to take one charger when I’m away from home

On a desktop, without the bonus stand, you could almost mistake the wood charging surface of these as being a phone in a fancy case, laying face down on the desktop while charging.

Dan, I try use the genuine nexus wireless charger with my nexus 6 and can only get it to work when I take the case off. Do you no if the nexus 6 charges with a thin case on, on this charger? If so I’ll definitely get one, my zens charger works bit its ugly and fiddly. Thanks for the great review.

Haven’t actually received a case on my Nexus 6 yet. It works on the Nexus 5 with a Spigen case on so it’s looking pretty good.