The LG G4 is going to be announced this year, possibly in the next couple of months, what it will look like is as always a bit of a mystery, but leaker @onleaks has tweeted a picture of what he says is a press render of the G4 – albeit an early one that’s subject to change.

Design wise, it seems that LG is looking to make it a slightly curved design based on this render, but as the source of this leaks says, it’s possible that this is still an early render. Early dimensions for the G4 are apparently 148.9×76.5×9.9mm – though this could change. 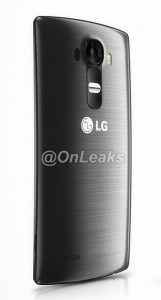 From the render we can see some things are very much the same with the Laser Auto-Focus still present and the rear mounted volume rocker with power button in the centre. The rocker and power button design has been slightly tweaked from the LG G3, but still very similar. The render also shows the Dual-LED flash and the rear facing speaker still sitting towards the bottom offset to the left.

For the LG G4, we recently heard that LG is looking to completely revamp the LG Android skin, with a plan to have an announcement featuring just the updated OS which will see an update to version 4.0.

Rumours for announcement time frames lean towards April/May, but we’ll obviously hear more when LG are ready to say something.

Are you waiting for the LG G4?

Is this the radically new design? They’ve just implemented the curve to their flagship?

Well, here’s hoping the software is better this time round.

I’m interested to see the new skin. Each one is an improvement on the last. They should’ve introduced the G3’s skin to the G2, although they haven’t even updated the G2 to Lollipop yet. I’d never buy a handset with a QHD screen if if has grainy text like the G3 though.