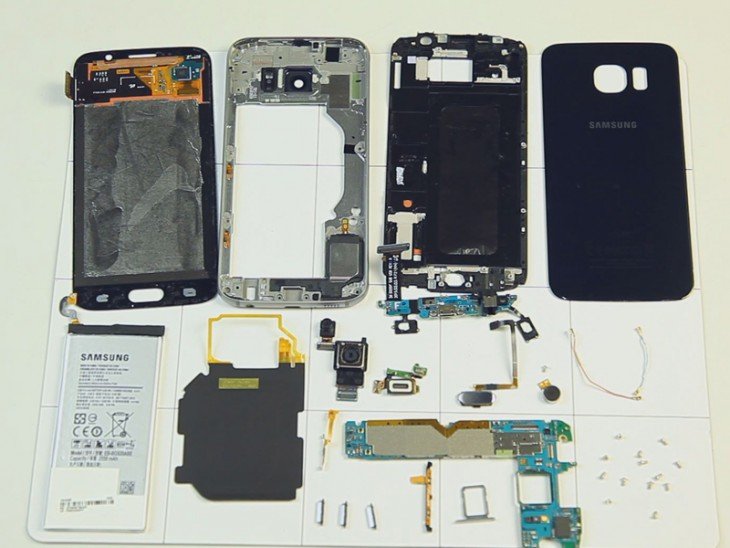 With a new phone on the market, the phone is of course going to be immediately taken down to its bare components at some stage and the team at etradesupply are the first to do so.

This is more a teardown than the usual Teardown review which sites like iFixit are famous for, so you won’t find a repairability score on this one – though we imagine that will come shortly.

The Galaxy S6 of course features a sealed in battery, so of course it’s going to be difficult to replace but it’s a fair bit of work to even get that far into the phone before you even look at that.

As far as repairing the phone, you’ll have to get it to pieces first. To start with the phone has an adhesive holding that metal and glass back on, so you’ll need a heat gun to soften it up before removal, from there you’ll find 13 screws holding the phone together, so it’s quite a well put together device.

There’s the usual array of components, circuit boards, cables and of course a lot more adhesive holding it all together and it’s a good chance to check out that metal frame that’s made all the difference in Samsung phones of late. You can watch the full teardown in this handy video that’s been produced:

hope Samsung will offer a option to replace battery in their service centre by paying extra change.

@ home jobs offer .._. I started working from home, doing various simple jobs which only required desktop or laptop computer and internet access and I couldn’t be happier… It’s been six months since i started this and i made so far total of 36,000 dollars… Basicly i profit about 80 dollars every hour and work for 3 to 4 hours a day.And the best part about this job is that you can decide when to work yourself and for how long and you get a paycheck weekly.—>