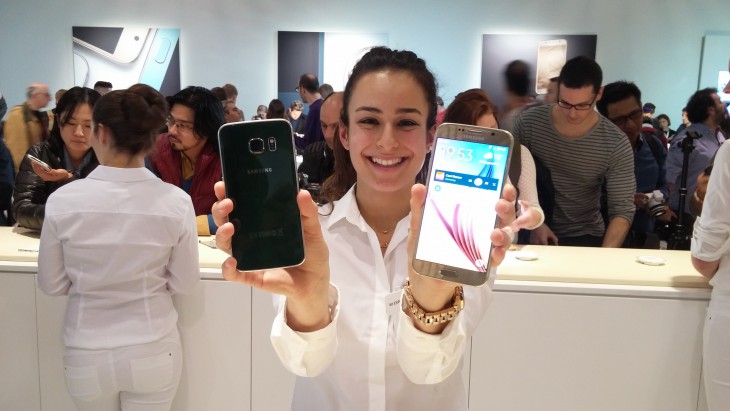 The Samsung Galaxy S6 will launch in Australia next month, and in the lead up to the launch we’ve been given a look at the retail pricing at Dick Smith Electronics and Move for the Galaxy S6 and at least a few of the cases. There’s also some pricing on Galaxy S6 Edge cases, but at this stage there hasn’t been any pricing leaked for the Galaxy S6 Edge handset – but we’re told they’re definitely on order. Stock wise, there’s apparently a fair few on order in the DSE system, so it looks like Samsung and Dick Smith both expect to get quite a number of sales out of this.

The media launch for the Galaxy S6/S6 Edge will be held on Monday in Sydney, so we’ll know more about carrier availability (Spoiler: They’re all getting it), colour availability (Please let the Green S6 Edge come here), as well as when we’ll see it (We hear April 10th sounds good) so stay tuned.

Are you excited for the Galaxy S6/Galaxy S6 Edge? Which Colour and what storage size?

I believe the difference between the grey imports and Australian models is the 700MHz band support which is *apparently* (as i’m paraphrasing whirlpool users) the best frequency band for 4G.

So if you buy grey your experience with 4G may not be the best possible.

Does anyone know if there are any kind of software differences between imported model from yatango etc and retail model? Do yatango tend to sell Aussie stock? Also, are there any extra fees for yatango, gst etc? Or is that only for orders over $1000? Thanks guys 🙂

its not aussie stock from yatango

aussie rom is locked down and has a few differences to the international version so expect slower updates. Differences include no auto rotate in gallery, cant change the docked icons in the default launcher and sfinder icons in the notification shade (might not be in lollipop). Also I think there was something with there being no camera shortcut on the lockscreen s5 on launch.

Great, thanks. So it may actually be an advantage software wise. Do you know about the gst etc? Cheers

Same price as iPhone 6 and the edge will be as iP6+. I’m a bit worry about the re-sell value if getting the edge.

$250 bucks cheaper on yatango for the 128gb s6. you don’t buy from ds for high end goods unless they’re on sale.

300 bucks for memory is disgusting.

Might go grey or wait for the price to drop.

The problem with pricing is why is there 100 between each model just for an increased in storage. I cant believe they are still pulling this crap

Interesting … elsewhere in the world the S6 is claimed to be cheaper than the S5. I guess we are being gouged again locally by Samsung Australia and retailers.

Well, considering how much our dollar as dropped in the last year compared to both the UK and US, it does make sense.

as usual everyone neglects that the american prices are without tax

Really … do we have to go through this crap … :S