Good News Everyone! Telstra customers are receiving Android 5.1 on their Nexus 6. It may not sound like big news, but after the hiccups we had last year with the Nexus OTA updates on the Nexus 4 and 5, this is sure to bring a smile to everyones face.

Mitchell kindly took the time to screenshot the update prompt and send it in, showing the Telstra carrier logo in his notificaiton bar and the prompt to Android 5.1. 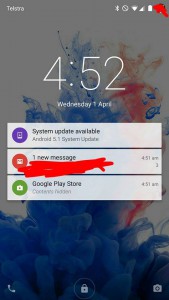 Before accusations start flying that Telstra has been blocking the update though, it seems like the update has just begun hitting phones in another wave. I purposefully left my Nexus 6 on Android 5.0 waiting for the OTA, which arrived last night – and I`m on Optus. So it appears that Telstra wasn’t blocking, it was just Google taking their sweet time rolling it out, although you’ll find that there were multiple incremental updates so Google may just have settled on the LMY47I build as the right Android 5.1 build for the Nexus 6.

The update is apparently hitting handsets now, so if you’ve been patiently – or not so patiently – waiting, you should be going to your Settings Menu > About Phone > System Updates to check for whether there’s a 430MB OTA update waiting for you.

Have you received Android 5.1 on your Nexus 4 or 5 on Telstra yet?

I got it weeks ago by removing my Telstra sim and resetting my device, Telstra were defiantly blocking the update

Hi! I have had android 5.1M on my nexus 6 for about a week. Works perfect. Like the new features like the pull down and go to Wi-Fi and Bluetooth. The clock animations and a cute addition. The phone seems faster because I am using all four of my cores. Burns more battery but faster is great. The update came from T-MOBILE.

You can now buy the Nexus 6 at a discounted price only at (NexusPhone Deals,com)

I just got a Nexus5 as well and was wondering why it hasn’t received the Lollipop update .

I’m on Virgin (so Optus) and I only got my 5.1 OTA update yesterday for my Nexus 5, so looks like Telstra folk haven’t had to wait any longer than other networks this time around?

Got the 5.1 update OTA on my N5 on Telstra this morning as well.

Got 5.1 this morning on my N5 on Telstra

I already sideloaded LMY47D.
It’ll be interesting to see if there’s any OTA that moves from D to I…

I did the same, but can’t find an OTA for LMY47I to sideload 🙁

I suspect we’ll be waiting a long time for a D to I, if they bother to do it at all.

I got the OTA this morning (from 5.0 to 5.1) It is LMY47I that is being pushed through. Not sure what this means for people who preemptively side loaded to LMY47D though….