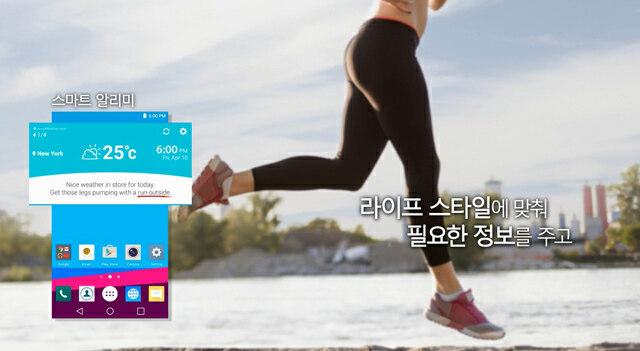 The LG G4 is tantalisingly close, with LG expected to unveil their 2015 flagship at a worldwide event starting on the 28th of April. LG had announced that they would announce details of the new LG UX 4.0 which would debut on the phone prior to the event and today they’ve spoken about their new software which will focus on being user-customised.

With LG UX 4.0, LG will again focus on camera software adding in additional functionality to the camera app, as well as the Gallery. LG will add a feature called ‘Quick Shot’, which will let the phone capture pictures even with the screen off by simply double pressing the volume key.

An additional feature called ‘Expert Mode’ gives the phone the ability to group shots from an event into an album automatically; this is done by the phone knowing where pictures were taken.

Adding to the previous smart assistant feature included in the LG UX 3.0 on the G3, will be a new ‘Smart board’ function which will collate calendar, music and health data into a single widget. Smart Alerts will also grab data from different locations on the phone to provide custom notifications. These notifications will include weather alerts based on your lifestyle such as ‘The weather looks great, time to go for a run’ if you’ve previously gone running using apps on the phone. Finally, a ‘Ring ID’ will also be included to personalise ringtones for people in your contacts list.

The UX 4.0 for the LG G4 should also hit other phones, or at least some of the headline features will head to other phones as the year progresses, a strategy we’ve seen with previous LG phones. We’ll see a lot more about the LG UX and the G4 when the phone launches on April 28th.

You can see it all in action in this video release from LG:

I looking forward to seeing more of this. I hope LG ports it to the G3 faster than they ported the G3’s UI to the G2.

Agreed. There are some good points in the LG UX 4.0. They look like they’ve put some effort into making the G screen actually useful. That was a waste of scrollable screenestate and resources on the G3. The screen off point and pray camera will be interesting to see if anyone manages to get a usable snapshot from it. ‘Expert Mode’ photo grouping based on location data will be useful in a general sense. I wonder how well it would work at organizing pix of the corporate display stands at something like MWC or CES though. In the video, I… Read more »

I use Nova launcher and I hate the fact that something as simple as the clock widget isn’t accessible on my G2 and HTC M8 once I switch to it.

I use Holo Launcher by Mobint Software on all my devices.
On my G3 I wanted to use the LG Smart Weather, clock and weather widget with Holo Launcher, but the widget was tied strictly to LG Home. Unless you are using LG Home, the weather widget does not show up at all in the list of widgets.

I really hope LG don’t do this same bone-headed move on the G4.