Mobile phone accessories are varied, with most places selling cases or sometimes these days, a selfie stick. You can buy bluetooth enabled or just a plain selfie stick, but how do you take a photo without a remote on the often cheaper non-bluetooth enabled models? The answer is a Bluetooth Camera Remote. Kmart are selling the Audiosonic Bluetooth Camera Remote for a low $8, and we thought we’d take a look.

Selfie sticks are dicky, let’s just get that out of the way, but if you’re travelling around and want to take a photo of yourself somewhere then there’s very few options. You can buy bluetooth enabled or just a plain selfie stick, but how do you take a photo without a remote on the often cheaper non-bluetooth enabled models – or if you setup your phone on a small tripod? The answer is a Bluetooth Camera Remote.

The Audiosonic Bluetooth Camera Remote is a pretty basic affair, in the packaging there’s the remote, a microUSB charging cable and an instruction book.

The remote itself is setup for iOS and Android devices with a button for each device on the front – for whatever reason, the iOS shutter button is slightly larger but this does help you to determine which button is which without looking.

At the side is a power button, and at the bottom is a microUSB port. There’s a handy loop at the top for attaching to a lanyard or keyring, but the plastic is fairly flimsy so I wouldn’t recommend using it for that. There’s a two-tone Blue/Red LED on the front at the bottom, which lights up when you turn the unit on (or charge) – it doesn’t stay on for long, but it’s there.

The Remote is compatible with devices running various versions of iOS, but more importantly a fairly wide range of Android devices. Audiosonic lists only devices running Android 4.2.2 and above as compatible, going slightly further to list off a variety of handsets which are compatible.

While the remote is supposed to be compatible with the default camera app on your phone, some handsets require a separate app: Camera 360 which is available in Google Play for free.

The list of devices compatible with the Bluetooth remote that can use the stock camera app or Camera 360 include :

The list of devices which can use the remote but require Camera 360 include :

Essentially the message here is that if your device is running Android 4.2.2+, isn’t on the list and you can’t use it with your stock camera app, grab the Camera 360 app from Google Play and you should have no issues.

Using the remote is pretty easy. Charge the remote up using the microUSB cable supplied connected to a PC, the LED turns red while charging, then you’re ready to pair.

Turn the remote on, enter the bluetooth menu on your phone and search. You’ll find a device called ‘AB Shutter 3’ or something similar. As you can see in the screenshot, the remote is found as a bluetooth keyboard and that’s essentially what it seems to be. There’s no magic Bluetooth remote voodoo here, it simply selects the shutter key and presses it for you. 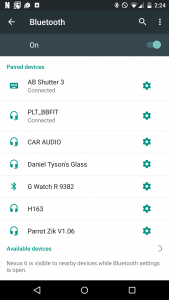 This is a dual-edge issue, it’s simple, but it also blocks you from using the soft keyboard on your phone while it’s connected.

You can press the remote key to your hearts content, but you won’t get much without opening the app. Once you open the camera app or Camera 360 set the phone in place, get in frame and you’re ready to take your first shot. For the first shot, you’ll need to hit the key twice, once to select and the next to take the shot. For $8 give it a go. It’s pretty basic but it’s made for a specific purpose and it works well for that purpose. Kmart is listing the remote as out-of-stock on their website, but I was able to find them in-stock in at least two stores.

I do want to have one and try to pair it my Selfie Stick Pro. 🙂

Bought one today at Kmart, Toombul
Works fine with the LG Camera app on my G3, on KK 4.4.2
It also works flawlessly with the Camera KK, and Google Camera apps.

I suppose the main question is – is it Bluetooth LE, or something else?

ie can you use it as a beacon?

Many of those come with camera shutters along with the other functions, and take less battery/have better range.

Not Bluetooth LE, can use it as a smart lock device if you want. Not sure why you’d use it as a beacon.

The Bluetooth 4 tags tend to incorporate camera shutter functionality in with their location/alert/etc. functions. Typical use case has them as ‘lost’n’found’ devices – although they are generally much more capable than that (eg motion tracking).

The battery life with Bluetooth 4 is also, obviously, much better.

If you were looking to get something in that area then the rest of the functionality beyond the simple remote shutter is obviously interesting.