Samsung are the manufacturer to beat in the Android market. They’ve held the mantle for a significant period of time, some would argue since the Galaxy S2. They have had a seemingly endless run of successful phones since then; each of the Galaxy S devices selling 10’s of millions of handsets.

One of the major strengths of Samsung over their competitors is their ability to fill the market spaces that are available, from Grandmas first smartphone through to the power, storage, performance, battery and screen snob tech junkies who need the best of everything yesterday.

The Samsung Galaxy A5 sits somewhere around the middle; it has a nice big and bright display, reasonable pixel density (although not amazing), otherwise powerful internals and a surprisingly decent battery life. For those who don’t want to spend big on a new smartphone, but still want a good amount of quality, the Galaxy A5 might just be the right phone for you.

The first thing that really struck me when I unboxed the A5 and began to inspect it was just how thin it is. There’s no other way to describe it, it’s super thin at only 6.7mm very light also weighing a tiny 123g.

In this impressively sleek body Samsung have packed in a 5-inch HD SuperAMOLED display running 720 x 1280 resolution at ~294 ppi pixel density. To a lot of users, that’s just a bunch of meaningless numbers but in essence you’ve got a pretty sharp screen with vibrant colour reproduction and touch responsiveness on an affordable budget. 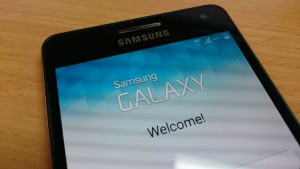 The rest of the specs are nothing to be sneezed at either; 2GB Ram, 13MP rear facing and a 5MP front facing camera, 16GB Storage with MicroSD all coupled with 4G LTE bands it’s not a bad option for someone looking for a phone that performs on a budget.

When you open the box you’ll be presented with Android 4.4.4 KitKat and if you’re expecting to get an update once you connect to wifi, you’ll be disappointed. There’s no Lollipop update ready for the Galaxy A5 as yet and no official word on when or even if (given the specs and how recently the device was released, you would hope it will) the update will be scheduled for.

Android version aside, the first question I have had asked of me from a lot of people looking at the device is about Touchwiz. How does it affect the feeling and behaviour of the device? It’s Touchwiz, that’s what it does but it’s not as bad as it was when I moved away from Samsung devices after the Galaxy S4. While i know Touchwiz is there and having input into my user experience with the device, I haven’t felt an absolute compulsion to change the launcher at least to get away from it.

To have a 2,300mAh battery jammed into a phone this size is reasonably impressive, but for the capacity of the battery; the life you get from it is astounding. Even on a heavy use day including a constant stream of SMS, Hangouts messages, emails, tweeting and streaming music; I still got home with over 40% battery life left in the phone.

I’ve had a close mate report that even if you did get caught out, engaging the Ultra Power Saving mode can get you up to 2 days standby time by turning your screen monochrome, reducing backlight and cutting background data. What apps can and can’t have data when in ultra power saving is user configurable so if you’re on the run but (for instance) cannot do without your email you’re in luck.

If you’re buying the Galaxy A5 for the camera capability, you’re buying the wrong phone. That sounds brutal, but it is the honest truth. The 13MP rear facing and 5MP front facing cameras are capable, but nothing special. They’ll capture some decent photos in well lit environments when the subjects are stationary.

Trying to capture a sporting moment, or even your youngster running around in the back yard is going to prove difficult. Even when taking photos of stationary objects I have found that the rear facing camera hunts for focus for a half second or more before settling. The end result is great, but achieving it could be faster and more user friendly; clearly Samsung are capable of it, just look at the Galaxy S6.

So far the experience with the Samsung Galaxy A5 has been pretty positive aside from a couple of small disappointments; the camera and not having Lollipop available. The design itself is slim, clean and unmistakably “Samsung”, the battery life is very impressive and the screen is (while not outstanding) more than satisfactory for most users.

A full review of the device will be published on Ausdroid soon so stay tuned.

If you were looking for a decent phone on a budget, what’s the one area of specs/performance you will not compromise on?

Decent phone but I wouldn’t pay $500+ for it. One can pick up a slightly used but in excellent condition S5 from the local classifieds for less then $500.

For people looking at a contract option, this comes in (with phone payments) under $50 per month on Vodafone. It’s that market that devices like this are aimed at.

Infact Kogan are selling the

Samsung Galaxy S5 4G LTE SM-G900 for $469 plus postage!!
BRAND NEW, BARGAIN!! If you’re a Samsung fan, which I was and am now not.
I got sick of all the crapware apps constantly updating and not being able to delete.