Announced back in April, the update to Android Wear 5.1.1 was first seen on LG’s Watch Urbane, which recently hit the market for $459. At the time, Google promised to roll the update out to further devices in the coming weeks. Those weeks are now up with a user on reddit posting a picture of his Zenwatch having received the update. 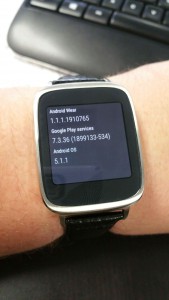 The Android Wear 5.1.1 update brings a number of new features to Google’s smartwatch platform, including support for Wi-Fi networks (on those watches which support it), as well as a wrist flick gesture to let you view cards with one hand and easier access to your contacts and applications – applications also now have the ability to keep your watch awake if required.

With Android Wear currently tightly controlled by Google, the rollout of software updates to all devices has been swift overall in the past, so you should expect to see this update hitting more watches in the near future – if you do, send us a screenshot.

Thanks for this article, if I hadn’t seen it and checked my watch just now I wouldn’t have realised that it had been updated! But sure enough, my ZenWatch is now on 5.1.1. I can’t say there’s anything world shatteringly new about the update, the wrist flicking works pretty well for accessing and scrolling through notifications but I’m not sure I’ll bother using it. I understand that the ZenWatch doesn’t have wifi built in so I won’t get to experiment with that. Applications are certainly easier to access now but I have been using mini-launcher on the watch and will… Read more »