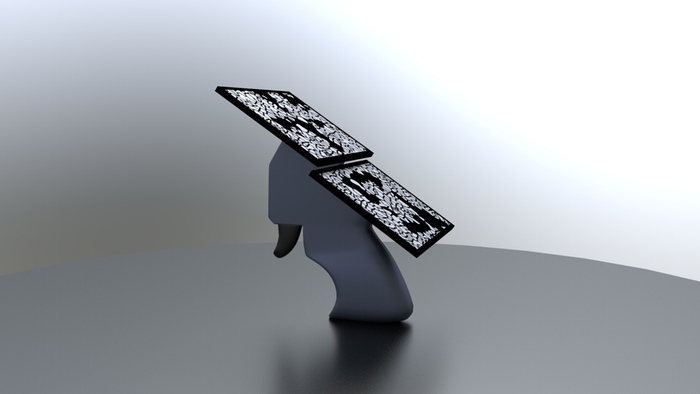 Google Cardboard is fun and all, but there’s a lot more potential to the platform if you add a hand controller of some sort. In keeping with the ultra-cheap nature of the Cardboard platform, Fangwei Lee & Shuo Zhang from Realiteer have come up with a cardboard solution: RealTrigger – and they’ve turned to crowdfunding site Kickstarter to get it off the ground.

RealTrigger looks like a mixture of a pistol-grip with a mutated QR code mounted on it. It looks ungainly in real-life, but when you look at it through virtual reality goggles it gains a new dimension. The RealTrigger system is interpreted by the software as a hand controller, which when paired with the pistol grip can take on a whole manner of useful functions when in a VR environment. As they point out in their campaign video, you can use the RealTrigger to interact with items in a world to pick them up, move them and of course shoot them – it depends on the software.

The Realiteer team have come up with an initial game for the RealTrigger which is based on removing germs from around a virtual environment. Called GermBuster, it looks fairly basic, but gives you an idea of what the system is capable of.

The RealTrigger Kickstarter campaign comes with options for DIY – much like Google Cardboard – but also offers options for a more professional looking and performing option, depending of course on which tier you want to back. The base level DIY option which starts at US$10, has a faster turn-around time, with a July 2015 ETA, while the other options which include tangible products, that start at US$20 are looking at more like November.

If you’re interested in checking out RealTrigger some more then head over to the Kickstarter page and check it out.

As usual with all projects of this type, we are here to inform not advocate backing the project. All projects on Kickstarter have no guarantee that they’ll end up being produced even if their goal is reached, so please ensure you are aware of all the terms and conditions before you back a project.