Earlier this morning during the 2015 Google I/O keynote, the developer preview of Android M – the next update to the Android Operating System – was announced.

Dan is currently in the US at I/O and managed to find the time to load the preview on his Nexus 6 for a quick look at Android M including a heap of screen shots of various new features.

I’ve seen a few people asking about what devices its compatible with and how to load the preview, so here we go.

First things first: If you follow this process, you WILL lose all data on your device. If you choose to do so, it’s at your own risk; please back up your data before you begin the process. Make sure (unlike I did this afternoon) that you leave yourself enough time to complete the upgrade ideally without interruption to avoid silly mistakes.

At this stage theres only a few compatible Nexus devices with the developer preview. The Nexus 5, Nexus 6, Nexus 9 and Nexus Player so unless you’ve got one of these or are prepared to spring for one at short notice you’re out of luck if you’re looking to check out the preview.

The list below assumes you already have the SDK installed and basic knowledge of Fastboot. 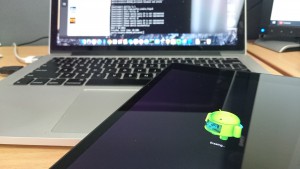 This should see you through to the initial load of Android M and it’s time to enjoy the new look and feel of Android.

If you’ve already loaded it, what do you think of Android M? If you’re yet to load; what do you want to know about?

I keep getting stuck on sending sparse ‘system’
Sure enough flash-all got stuck there, but I’m also seeing it when I run the flashes individually as you’ve got here. I can see in the screenshot at the beginning of the article nothing took more than ~25 seconds for flashing system.img. Any tips for me? I’ll leave it running a while longer I suppose.

Also make sure you have done “fastboot oem unlock” before you head down the path of flashing.

Thanks for the reply, I actually had missed the preview channel tools when I was updating my SDK and that fixed it.

OS seems pretty solids on Nexus 6, app compatibility is lacking which is to be expected

Anyone else have the WiFi icon in status bar and notification shade flash on and off? N6, seems to happen on 2.4 and .5ghz, thanks

Why not simply use the flash-all.bat that they provide for you?
I’ve installed it on my Nexus 5 and it seems good so far – but it’s early days yet.

Hmm, didn’t seem to work for me on the Nexus 9. Just sits on black screen with “Google” and doesn’t move from there.

Apart from some crackling sound in YouTube it’s working well on my Nexus Player (though I’m not seeing much new). I’m using it on my Nexus 5 and it feels really solid too, it might just be the fresh install but it feels really fast and there is some nice touches here and there. Looking forward to more features with each ota (the tap search thing would be a great start).