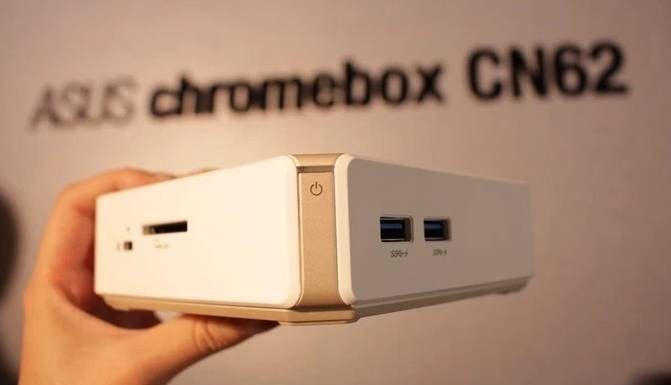 As well as new tablets, a watch and a new phone, Asus has also unveiled a slew of gaming laptops, monitors and other components, including a new Chromebox, aimed at low-power consumption.

The Asus Chromebox CN62, is a similar design to their previous models, though runs improved hardware. The Chromebox runs a fifth-generation Intel ‘Broadwell’ processor, with enough power to run all the apps you could ever want, as well as 4K/UHD video. The Chromebox will also connect to wireless AC routers, with 802.11ac Wi-Fi built-in.

The Chromebox has been quieted down from previousl models, with noise levels at 17dB at idle. The Chromebox low-power aspect is a key feature with the Chromebox drawing less than an LED light bulb at just 6W.

Availability for the Asus CN62 Chromebox hasn’t been announced as yet, but we expect to see more from Asus today on that front.

I want to replace my ageing laptop, which has become our main “desktop” computer.

I have a chromebook but wouldn’t mind something genuinely more desktop orientated, so a Chromebox and monitor would be a good buy.

But I need something that will download torrents, and I wonder if anyone has had any success with a Chrome based torrent client, or if I’m going to have to install Ubuntu?

awesome.. I’ll give that a go.

I don’t suppose you’ve ever found a media server that will work OK?

Plex? do you mean standalone on Chrome OS without Ubuntu?

Well you can run ubuntu and chrome os at the same time with no performance decrease as they both use the same kernel so you could just have xbmc running on top of chrome os.