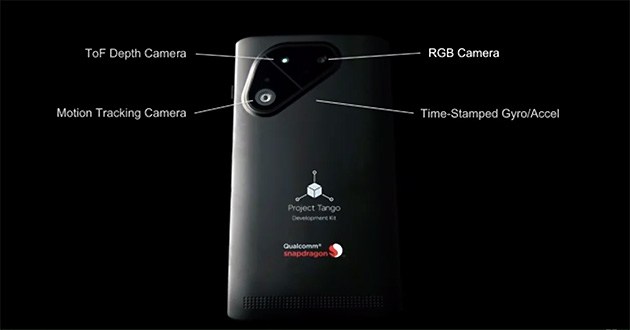 Google’s Project Tango has been an interesting side-project that Google began almost two years ago, when they announced a phone which would 3D-map the world around it. We’ve never seen the phone in the flash, but we did finally see a tablet released, that’s now quite widely available. Now Google has announced a second Tango phone, and it seems like we might actually see this one.

Google made a fairly big splash with Tango at Google I/O this year, showing off the device in action on the show floor. The demo area contained a mapped area, which users could wander about with Tango tablet enabled NERF guns that enabled players to traverse a map populated with enemies that could hide and attack – making for quite an interactive game, but the tablet was quite cumbersome and a smaller form-factor would make this a lot better.

The new Tango phone was announced in partnership with chip manufacturer Qualcomm, who will supply a Snapdragon 810 processor for the phone. The Snapdragon 810 has been chosen due to the dual 14-bit Image Signal Processors (ISP) included in the processor, as Tango is heavily reliant on visual processing through its on-board cameras.

The phone is due to ship in Q3 this year, though this will most likely be to developers only, just as the Tango Tablet is aimed at developers. A consumer edition is likely to come at some stage in the future, but there’s no time-frame to share at this stage.

I really hope we get to see this phone here in Australia.