Halfbrick Studios, the well known Brisbane based developers behind such blockbuster games as Fruit Ninja, Jetpack Joyride and more, has launched a new game today, with Radical Rappelling dropping into Google Play.

Radical Rappelling is an adrenalin fueled vertical scroller which sees you playing as thrill seekers Rip and Roxy as they attempt to outrun molten lava as they rappel down the side of a mountain. Along the way, they’ll dodge obstacles, collect coins, all while dodging the ever-present lava juggernaut forcing them to move on through the game.

Roxy and Rip can perform tricks along their run, ricocheting between launch pads or riding rainbows. Each trick can be chained together to fill the ‘Remix Bar’, which gives players a chance to run through with invincibility for a period.

The game is freemium based, so you’ll download it free, but are presented with options to purchase virtual goods in-game. Pricing ranges from $1.29 – $129.99 per item (that’s right $130 for one in-game item) and you can purchase items such as ‘sunglasses, superhero capes, and the highly practical “sausage rope”’.

Radical Rappelling is now available to install from Google Play, head on over and check it out. 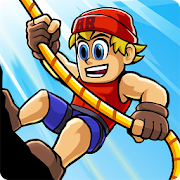 “Pricing ranges from and you can purchase items”

Looks like a bit of the post is missing there, but it’s good to know that it at least ranges from _something_.

Also, if they’re getting away from lava wouldn’t that just burn the rope? And then they’d fall. And die.

The final image bleeds over the final bit of text but the pricing is there.