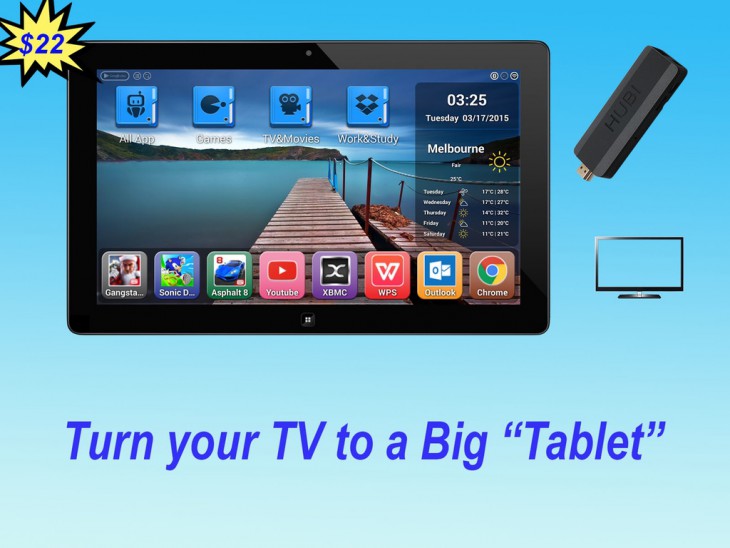 We love a good Kickstarter campaign, and there’s a bonus in discovering it’s an Android one. Today we bring you the Kickstarter project for Hubi Stick which has just launched, looking to bring Android to your TV on a HDMI stick.

The Hubi Stick plugs into your TV and is then controlled through an app on your phone or tablet (they say smartwatch as well). As with most Android devices on HDMI, it’s a fairly basic hardware stick but runs the customised ‘Hubi Desktop’ software. Hardware for the stick includes :

The Hubi Desktop seems to be a fairly basic overlay on top of Android 4.4, which has a more intuitive interface than some of the ones we’ve seen on the market. The bonus of Hubi Stick seems to be in the ability to control the interface from another device rather than a separate remote control.

Hubi Stick is apparently set to ship in October, with the bottom line is you’ll pay $29 for the device which includes a USB cable – presumably to power the stick from your TV. There’s various other rewards if you want.

If you’re interested you can check out the Kickstarter – or IndieGoGo (they have both) project pages now.

As usual with all projects of this type, we are here to inform not advocate backing the project. All projects on Kickstarter (or IndieGoGo) have no guarantee that they’ll end up being produced even if their goal is reached, so please ensure you are aware of all the terms and conditions before you back a project.

Probably the most hideous UI I’ve ever seen. This is also nothing new. Here everyone gather around on the biggest screen in the house and check out our ugly 90’s looking software, if this doesn’t impress you I don’t know what will..

You can buy many different versions of the same thing, right now, on deal extreme