Owners of the Telstra Galaxy Note 4 and Galaxy Note Edge are reporting that they are being prompted to update to Android 5.0.1 (Lollipop).

The update, which will bring both devices close to the latest version of Android 5.0 (Lollipop), is long overdue and was delayed originally because of what Telstra said were issues with “Show stopper” features only 2 months ago. It also comes months after Optus approved the update for their users, whilst Vodafone users began reporting the update as live on June 3. 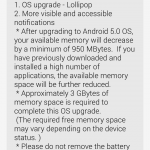 The total size of the update is about 1123.12MB and its probably worth downloading the update via WiFi. The update has only begun to roll out and is being staggered in rounds. To check to see if you have the update you’ll need to go to Settings > About device > Software Updates > Check for Update.

Have you got the update yet? What do you think of Android 5.0 update on your Note and Note Edge Phone? Let us know your thoughts in the comments below.

I got mine on Vodafone a week ago.