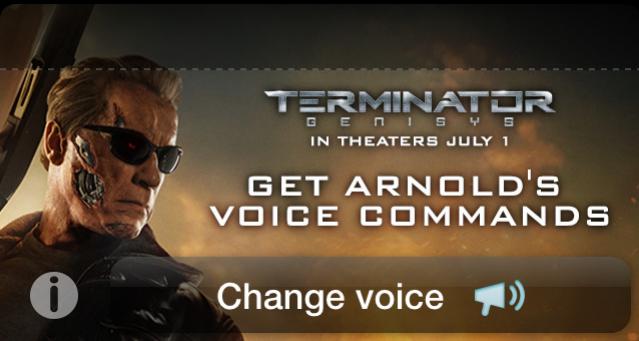 Terminator Genisys is set to roll into theatres at the end of this month. As part of the promotion of the film, Arnold Schwarzenegger has lent his voice to the navigation app Waze as a custom voice for users to choose.

The voice addition isn’t the only change being made to the app for the Genisys promotion, according to Waze theatre locations showing Terminator Genisys will show up with an endoskull with glowing red eyes over it when the film opens in theatres.

About the promotion, Arnold said:

From the first time I used Waze, I have wanted to lend my voice to it. The Terminator is the perfect machine to guide Wazers to their destinations. Every single day on social media fans ask me to record my movie lines, so now I get to bring this classic role and my charming Austrian accent into their cars.

This isn’t the first time that Waze has used a celebrity voice to promote a movie, previously adding Kevin Hart’s voice to promote the movie Ride Along. That voice was a limited time offering and it’s expected that this promotion will be too. For now though, to activate the voice go to Settings -> Sound -> Voice Language and select ‘English US – Terminator Genisys’.

Unfortunately it’s a limited offer – if someone can get the voice files and apply it to my Waze app permanently I’d appreciate it. For now, enjoy Arnold warning you of any potential Skynet incursions while you drive.