Home Mobiles Samsung looking at launching the Galaxy A8 in China – an... It would seem that Samsung is looking at launching a new mid-range smartphone with the Galaxy A8, which offers an an attractive designed phone with ultra-thin bezels.

The Galaxy A8, which is apparently set to launch in China on July 17, showed up in a series of leaked photos revealing its thin-bezels as well as a super svelte 5.94mm thin body. According to Nowhereelse.fr, the Galaxy A8 will retail for approximately €439 with SamMobile further saying in its post that the Galaxy A8 would be a replacement for the Galaxy Alpha, which was removed from the market prematurely.

There is also a 16-megapixel camera with Samsung using a thinner ISOCELL sensor with reduced pixel size. This will bring an aperture of f/1.9 and real-time HDR. There will also be a 5-megapixel front facing camera which would be inline with other mid-range smartphones currently available. 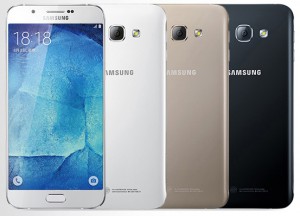 The Galaxy A8 also has a fingerprint sensor under its home button for biometric authentication and will come in three colours – black, gold, and white. It is unsure if the Galaxy A8 will be made available outside China or if it will find its way to our shores and lets be honest, with that ultra-thin bezels it would be an welcome addition to its line up of Galaxy smartphones here, but we will have to wait for an announcement from Samsung Australia to find out if the Galaxy A8 will be coming here.