With the OnePlus 2 set to be officially unveiled next week via an innovative Virtual Reality event, there is not much unknown about this device. This morning an apparent image of the front panel was leaked via Weibo and this afternoon all skepticism regarding this leak was removed when images of the OnePlus 2 surfaced as it passed through China’s certification body, TENAA.

The front panel images display not only the presence of a home button/fingerprint sensor but also the dimensions of the screen. The dimensions of the OnePlus 2 front panel are shown to be 148.6mm x 71.7mm, smaller than the 152.9mm x 75.9mm of the OnePlus One. The screen size is yet to be announced but it points to a similar sized display (5.5in) when you factor in the smaller bezels seen in the leaked images from the TENAA. 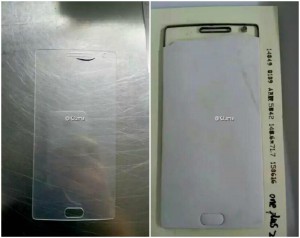 The images from the TENAA show both the front and back of the device. The home button/fingerprint sensor can be seen on the front but nothing else. The rear of the device shows the camera and flash but also a third sensor of some description. It is unknown what this is but we won’t have to wait long to see it with the announcement coming on the 28th of July (Australian time).

The OnePlus 2 has been confirmed to have a Snapdragon 810 v2.1 processor, 4GB of DDR4 RAM, fingerprint sensor, USB-Type-C connector, 13MP camera, a 3300mAh battery with a price tag of under $450USD. It is unknown at this stage whether it will be sold direct to Australians this time but considering the popularity of the first incarnation here we can only hope so. What is known that an invite will be required to purchase this device. If you are after an invite stay tuned to the Ausdroid where we may have a couple on hand, or in check out the Ausdroid Google+ Community as Ausdroidians shared their invites there last year in abundance.

Do you like the look of the OnePlus 2? Are you likely to purchase it?

I’ve got to admit I’m very happy with my Oneplus One and can’t see myself feeling under any compunction to upgrade any time soon – it certainly does everything I want a phone to do quickly and smoothly. By the time I might be inclined to try something new there may well be a Oneplus Three option available. The company is slower than I expected when it comes to releasing OS upgrades but, given that Samsung only released 5.02 for my Tab S 8.4 last week, there aren’t many that are doing much better! I occasionally flirt with the idea… Read more »

Optus. No band 28 and no band 40 means pretty much no 4G coverage with Optus in the ACT (except for small pockets of L2600). It also means reduced speeds with Optus in metro areas, given that Optus has the most spectrum in band 40.

Can I just get a Oneplus One with upgraded internals. I love the ONE too much I think.