Home News and Editorial Huawei set to open a Sydney based Australian National Training and Development... 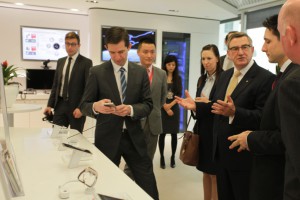 Huawei has today shown off the first look a their soon to be opened Australian National Training and Development Centre.

The facility, which opens in the next few months, was toured today by Federal Assistant Minister for Education and Training Senator Simon Birmingham and Huawei Chairman, John Lord AM.

The facility will be equipped with state of the art equipment and will be used to test new applications and innovations and undertake R&D locally as well as train Australia’s best and brightest, including students from Australian universities and vocational education ICT students as well as Huawei staff.

When the $30 million Training and Development Centre, opens in the next few months, it will accommodate training for students selected in the Huawei ‘Seeds of the Future’ program, the first batch of which was announced late last month.

Huawei spent US$6.6 billion in R&D last year on such diverse technologies such as mobile networking hardware technologies as well as their consumer mobile divisions, this centre is part of that investment. The new centre will join 16 other Huawei R&D centres and 28 joint innovation centres which employ around 76,000 experts around the world.

Regarding his visit to the centre, Senator Birmingham said

Huawei’s $30 million investment in the centre will enable Australians to become skilled in the use of the latest technology, including students undertaking placements as part of Huawei’s Seeds for the Future initiative, which offers work experience to students from around the world. Huawei is a global leader in cutting edge technology and has a commitment to up skilling its current and future workforce, as well as the workforce of its clients.

Huawei has been building their brand perception and recognition in Australia in the last 12 months, there has been a definite uptick in recognition and perception. The centre looks great and we hope to check out it out when it launches later this year.