While Samsung has a league of fans of its current range of Galaxy S6 and Galaxy S6 Edge handsets, if you ask any users what their number one gripes are, battery life (or the lack of it) always seems to filter close to the top; they’re great phones, to be sure, but their battery life frankly sucks. I’ve found in using the Galaxy S6 we were given to review that it struggled to last more than about six to eight hours of my regular use, which means regular charging throughout the day. This is almost acceptable, if you’re mostly behind a desk, but if you’re out on the road, or on the go, it just doesn’t do the job.

External battery packs have been an option for phone users for quite a while — I have a Xiaomi 16,000 mAh battery pack that I lug around with me on holidays — but they’re cumbersome things; you need to have them tethered via a cable to your phone, they don’t charge your phone especially quickly, and they’re often bulky.

Battery cases aren’t exactly new either; such cases from Mophie have been around for quite a while, but they’ve been rather bulky in the past too, though they’re much more aesthetically pleasing than an external battery pack.

For the Galaxy S6 range, there’s two main options at the moment; Incipio’s newly announced offGRID case, which pairs a battery with external micro-SD support, and Mophie’s Juice Pack which offers just power. We’re taking a quick look at each, though we note that they are not available in Australia at the time of writing.

The offGRID from Incipio (pictured; top of this article) is a double-ended proposition; not only does it offer an external battery source for your S6 handset, but it offers something else that Samsung took out: support for an external microSD card. They claim to do this in a case that is not especially bulky, though necessarily there is some bulk because there is a battery in there.

Storage-wise, the offGRID allows you to use a microSD card up to 128gb in size with your S6 handset. How? Simple: you insert the SD card into the battery case, and there’s a switch on the side of the unit that toggles between supplying power, and accessing external storage. It’s not a perfect solution, being one or the other, but not both, but it’s better than the no-option-at-all that you get from Samsung.

When the storage mode is activated, you can sync your data from your phone to the external storage and back again, using it to store photos, videos, music and more. Incipio even have their own file browser app to make this as easy as possible.

Storage to one side, the offGRID includes a 3,700 mAh external battery, which more than doubles the power capacity built in to the S6 range. With this, you could quite easily get a full day from your S6, and possibly more depending on your usage. Bonus features are that the offGRID maintains support for Qualcomm’s Quick Charge and Samsung’s Fast Charging, so you can charge your phone up to 75% faster while the offGRID case is fitted to your phone.

Last but not least, if you’re an NFC user (for payments or otherwise), Incipio claim that the offGRID case will not impede the phone’s built in antenna, so you’ll be able to continue using these features without removing the case. Neat.

Incipio’s offGRID for the Galaxy S6 is 75.6mm wide x 156.4 mm tall x 15.2 mm thick, making it virtually the same size (if not a bit shorter) as Mophie’s case, below. The one case supports both the S6 and S6 Edge (via the use of an included bumper) making it a very wise choice if you’ve got both phones in your family.

Incipio’s offGRID case is available for $US 89.99, and while it doesn’t appear to be in retail stores in Australia, shipping will be offered for between $8 and $18 depending on service level chosen. Incipio lists the cases for pre-order at the moment, but their blog post suggests the cases are available now. 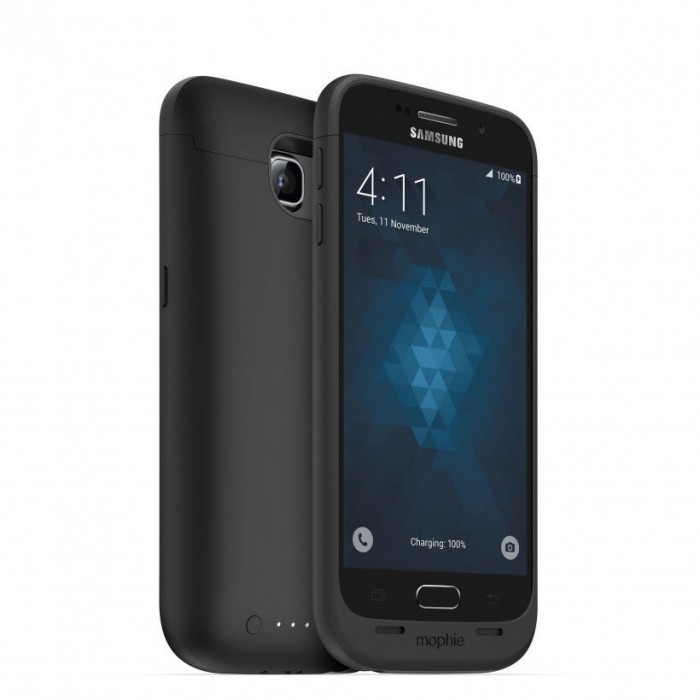 Mophie’s Juice Pack for the Galaxy S6 range has been around for a little longer, and while it is the incumbent (having made battery cases for mobiles for quite some time), it is lagging a little behind Incipio’s offering. It doesn’t have a storage feature, and their spec list does not refer to fast charging support. However, it remains a capable option, and it is more widely available.

The Juice Pack includes a 3,300 mAh battery, and a switch that allows you to turn off the external battery when it’s not needed, to save that extra charge for when you need it most. Mophie’s claimed usage is impressive, extending talk time from 17 hours to 34 hours, and internet use from 12 hours to 24. Mophie have also aimed for a compromise between size and convenience, offering enough size to include a decent battery and impact protection for your phone, while not being overly bulky.

The stated dimensions are 75 mm wide x 158 mm tall x 16 mm thick, so its basically the same as Incipio’s offering, and it comes in two variants, one for each of the S6 and S6 Edge. Sadly, though, they’re not cross compatible, so if you use both handsets, you’ll need two cases if you want to support both.

Mophie’s Juice Pack for the Galaxy S6 / Edge is available for $US 99.95 both online and in (at this stage) American retail stores. Our spies have seen them at Best Buy and a few other places, so if you’re visiting the states any time soon (as I am) you might be able to grab one while you’re there.

Ed. We know these cases aren’t directly available in Australia just yet, but as you can order them online and ship them here quite easily, without the use of 3rd party forwarders, we thought we’d tell you about them anyway!

I came here expecting to find culprits (and solutions) to the battery drains, not products to buy, I’d much rather Samsung fix the Cell Standby issue, which is really the only serious problem. Everything else is normal battery usage. Let’s face it….the S6 is a powerful unit. It requires juice. If you run the screen on full brightness, don’t use Power Saving, use the camera a lot, etc., you will have a shorter battery life. If you’re smart about it, the battery life is no issue. Under normal usage, I’m at just under half after a full day. If you’re… Read more »

I don’t understand why everyone says the S6 battery life is so awful – coming from a Nexus 5 it’s far better, I easily get through a work day with 40% or more left after 6pm and 25%+ by the time I put it on the nightstand charger at 11. I use it moderately with regular email checks, texting and a game or two of plants vs zombies. How do you use it so much as to suck it dry in 6 hours and still have a day job?