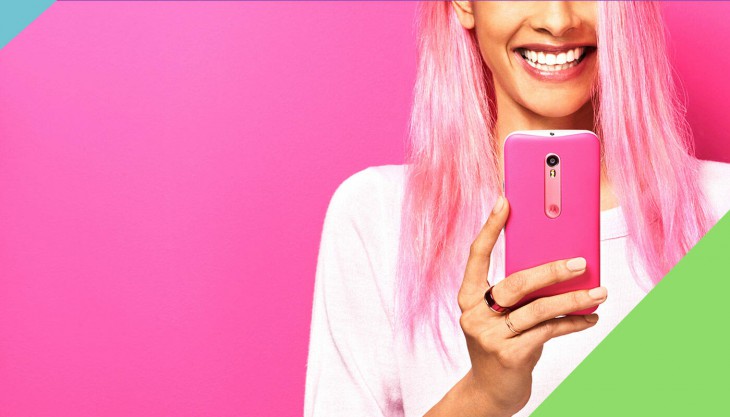 Motorola has tonight announced a new model of their mid-tier Moto G, bringing the phone firmly into the premium mid-range market.

The new generation Moto G has been leaked incessantly in the lead up to the launch and many details previously leaked have now been confirmed. The phone will feature an IPX7 splash resistance guarantee for the first time, making the phone better able to handle life’s little accidents.

Also added to the Moto G 2015 is an update to the camera. The rear camera has been bumped to a 13MP sensor, while the front-facing camera has been bumped to a 5MP shooter. Motorola has also included the wrist flick ‘Quick Capture’ gesture first introduced on the Moto X, allowing for photos to be captured quickly simply by a gesture. The screen on the Moto G will be a 5″ HD (720p) resolution with 294ppi. The phone will come with some fairly decent specs including a 5″ HD resolution display, long lasting battery and is powered by a 1.4GHz quad-core Snapdragon processor. While storage is limited – 8GB and 16GB will be available – the phone will also come with a microSD card slot.

While previous iterations of the Moto G have required a secondary ‘LTE’ model released after the Moto G, the Moto G 2015 will feature LTE built in from the start.

The Moto G will be available in Black and White, but will offer a range of coloured shells as well as options to customise the Front colour, Back colour, Accents, Memory through Moto Maker, though no mention of Moto Maker for Australia has been mentioned as yet. We’re about 40 minutes away from the Live Stream of the Motorola launch event, if you want to tune in you can jump on the live stream here. We’re waiting for Motorola Australia to give us local launch information and we’ll advise as soon as we know more.

The AU website has been updated with all three new devices so hopefully we’re in the first wave (the G is launching in 60 territories today, so surely AU is one of those?). Grabbing one for my mum, and seriously considering the Moto X Style to replace my Nexus 6… Come on Google – Nexus 6 2015 better be good. Moto have thrown down the gauntlet!

The Moto X Play looks like a good phone.

Is this the best backup phone to have, or the gift for mum?, i like moto g.