Sony has continued its rollout of Android 5.1 to a number of its top-shelf and mid-range handsets, and today we’ve received word that the well-liked Xperia Z3 Compact (shown above, right) has received the Android 5.1 update overnight. Ausdroid reader (and one-time writer) Michaela sent in a screenshot showing the update notification which she randomly received shortly after midnight. 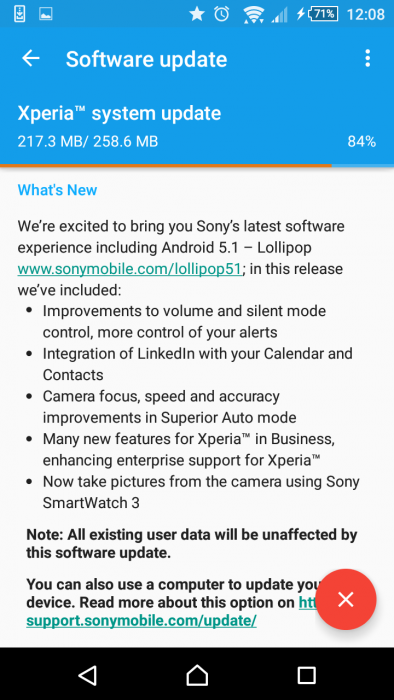 Though we’ve not been hands-on with the Z3 Compact with the new update, we have with its bigger (and mostly identical) brother the Xperia Z3, and Android 5.1 feels right at home. Just like the Lollipop update over Android KitKat, Sony’s Compact flagship runs the new software really well, avoiding some of the complaints from other manufacturers where the Lollipop upgrade has destroyed user experience, performance and battery life.

The update is relatively small, and being an upgrade from 5.0.2 to 5.1, there’s not much to change. Of course, we’d suggest you download it over WiFi (and you’ll be prompted to, anyway) and make sure you’ve got a bit of battery life before applying the update. It shouldn’t take more than twenty minutes to download, install and reboot, and then you can enjoy the latest Android, before some of this year’s flagship phones even receive it. That’s not bad for a device from Sony that’s getting close to a year old.

Are you still using Sony’s Xperia Z3 Compact? Have you received the update? Let us know in the comments!

Biggest complaint about my z3 compact, the Bluetooth does not send track info to my car head unit. I can’t even skip tracks from the head unit! My old SGS2 worked fine a iPhone 4 worked fine and even sonys z1 compact worked fine but they went and farked something with the z3 compact??? Confuses the hell out of me how this happened and frustrates me even more 🙁

Bit strange. I get track info with mine. Even podcast names from Pocket Cast work.

I bought mine off kogan. It’s a Chinese model. I did a full wipe and loaded the non carrier branded au version a week or two after getting it. Neither worked with my head unit. I use my pebble watch to skip tracks while driving. Not sure if that’s legal but its certainly safer than illegally using the lock screen on my phone to skip tracks. I’m pretty sure its a hardware thing. Other users have reported similar problems with this phone and other branded head units to mine so there’s something going on. I really hate to say it… Read more »

Just buy an iPhone then if you really want one. No one really cares outside of the internet. The iPhone v Android arguments may still hang around, but mature adults should be able to get past crap like that.

Yes, still rocking the Z3C, but not sure for how much longer, the 16GB internal storage is becoming more and more of an issue, even after uninstalling a bunch of apps. Just not sure what I could move to.

Other than the storage limitation, the Z3 Compact has been great.

Why not just use the micro SD option? A lot of apps can be moved to SD and even though it’s slower they show no performance degradation in my experience, which is using a z3 compact with a cheapish class 10 SD card 🙂

Just don’t put 1gb size games on the SD card, they take a lot longer to
load but gameplay seems largely the same.

I have a 64GB card in mine, it’s about half full. A lot of apps can be moved, but not enough. Those that can be moved often store cache on the phone anyway, which I do clean up, but more often than I should have to. Things like Instagram refuse to store photos anywhere other than on the device. My Z1C was rooted and I used a folder mounting program to move a lot of stuff to the SD card, that worked pretty well. I am an edge case, I have a heap of apps. 16GB plus an SD card… Read more »