Earlier last month Microsoft released a closed Beta for their Cortana Digital assistant on Android. As is the way with such thinks the APK for the beta leaked into the wild giving the broader Android tinkering community a behind the scenes look at Microsoft’s implementation of a mobile digital assistant. In the most recent update to the beta, The Verge reports, that the app now has the ability to replace Google Now quick launch shortcut of long press on the home button. 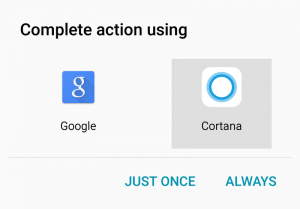 While this is only one of the many ways Google Now can be launched it shows that Microsoft is serious about making Cortana a full replacement for Google Now on Android. Microsoft has yet to implement voice activation into the app and replace the “Ok Google” hot word with “Hey Cortana”. Officially the Cortana Beta is only available to Windows Insiders (Microsoft’s community beta testing group) in the US, however we have acquired a copy of an earlier version of the APK and can confirm it does work on Australian Shores. With Windows 10 now rolling out across the globe, Microsoft is clearly shoring up their cross-platform strategy to make staying in their ecosystem much easier, and desirable perhaps.

Microsoft has not been shy in recent months in releasing a long list of apps specifically designed to replace traditional “stock” android apps.

As far as Microsoft’s listings in Google Play go this is the tip of the iceberg. With Microsoft having either acquired or developed an almost full set of apps for Android it is clear that Redmond is taking Android seriously. With Hyperlapse and Office Lens also making their way onto Android Microsoft could also be seen to be pulling ahead with some app features. Microsoft being a large player in the more traditional enterprise space and with the increase of BYOD programs within the enterprise it’s not hard to see a large market that these apps may appeal to.

Where do you stand on Microsofts encroachment into the Android ecosystem? Do you see it as the beginning of an Android takeover or do you welcome competition into the marketplace?

Source: Microsoft News.
Via: The Verge.

If it creates more choice for people, that’s cool. That said, I didn’t even know this shortcut replacement was even possible on non-rooted devices. Considering how much more attention Microsoft is paying to Android than WP, I would not be surprised if they pivoted fully in a year or two.

Between this and news that Android APKs can now be installed on W10M devices, I wonder how Google is going to respond.

“You don’t want to pay for patents? Make a Microsoft themed Android phone.” is becoming more and more thorough.

I, for one, welcome our new MS overlords. Seriously though, competition is a good thing, spurs innovation.

I wonder if MS will build an Android phone? Can they have access to the Play Store and have their apps set as default?

They could build a MS android phone, BUT to gain access to the google playstore, you have to bundle certain google services and they also have to be the default. So you won’t see ‘bing’ as the default search engine for example. Google also has requirements for icon placement etc, basically putting google services front and center. Which is fine with me. Google made the OS, they should have front and center placement. MS could go its own path like Amazon did with the fire phone. But that would mean no google play store. They might be able to get… Read more »