Yesterday Google released the Android Wear 1.3 companion app into the wild, and while the forward facing changes are limited to allowing users to select which of their connected Wear devices to use in debug mode, not a feature used by the majority of us, the team at Android Police have given the APK their teardown treatment and revealed a few potential future goodies.

If you have developer options active, and USB debugging turned active on the companion device the new debugging menu will appear in the companion app. This feature will be of more use to developers who have multiple wear devices connected to one phone.

Remember as with all leaks, rumors and tear downs of not yet live feature you will need to read with salt on hand, as for the new updates the tear down revealed:

Together watch faces was also rumored in name however the functions seem to be a little more than originally thought. With a Together watch face two Android Wear devices can be paired ‘together’ and allow two way communication via the watch face, and perhaps via an additional wear specific app.

Imagine being able to glance at you watch face and see that the person you’re paired with is out for a run or has arrived at home. These use cases could be seen to be crossing the creep/ stalking line, however the tear down suggested that developers could use the function for multiple uses, so we should wait and see what developers can do with the functionality.

It appears that Google may be preparing to replace, or supplement, the existing Google Now weather cards with a dedicated Wear app for weather updates, forecasts, and information. The teardown didn’t reveal any specifics for an app so the look, function and differences of a dedicated app are unclear until either a future update to either the companion app or to the Wear version of Android itself.

Google might also be looking to replace the Google search app “translation card” with a dedicated Wear app. Currently if you ask for a translation via wear the Google app will send a card to wear as below. 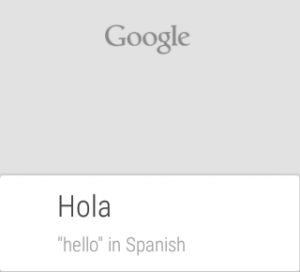 The teardown suggests that at least one new feature will be included in the dedicated app, “auto-rotation”. This will allow the watch to rotate the screen so a second person (e.g. not the person wearing Wear) can see the screen more easily. This suggests that the new app may be able to be used for “conversational translation”.

If you want to try and get the update legitimately check the Playstore.

If you’re the type to hurry things along, you know where to look.