Home Mobiles Samsung announces the Galaxy Note 5, coming to the US next week 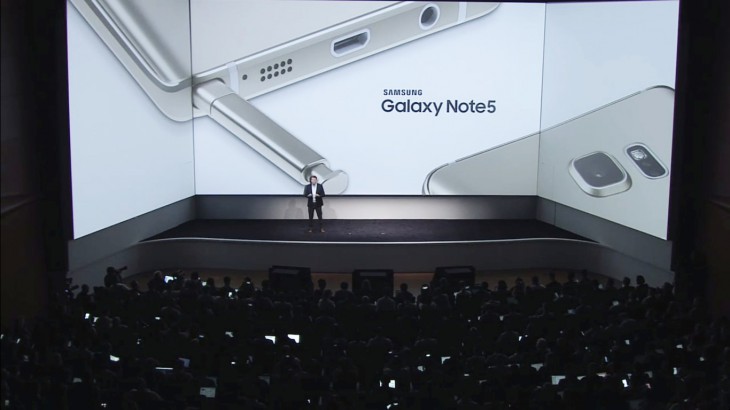 Samsung has revealed the Galaxy Note 5 at its Unpacked event in New York, bringing many of the design cues of the Galaxy S6 into its popular larger form factor device.

The Galaxy Note 5 features a 5.7” QHD Super AMOLED display, powered by an octa-core CPU and 4GB of RAM. That CPU is Samsung’s own Exynos 7420, with 2.1 and 1.5 Ghz cores. As with the Galaxy S6 earlier this year, Samsung’s nixed the Micro SD expansion slot meaning your 32GB or 64GB storage is all you get. There’s also a smaller bezel than ever around that large screen and a gentle curve on the edges at the back to help the phone fit in your hand comfortably.

Like the Galaxy S6 before it, the Note 5’s 3,000mAh battery is perhaps not a big as we’d have liked to see but we’ll have to wait until we get the device in hand to see what its battery life is really like. Samsung’s proud of its super fast wireless and wired charging technology, a step up from what we saw in the Galaxy S6 so at least if you get caught short on battery you should be able to recharge it quickly. Both WPC and PMA wireless charging standards are supported.

The Note 5 carries the same excellent 16MP camera Samsung introduced in the Galaxy S6 – it’s an f/1.9 camera with optical image stabilisation, but the Note 5 brings the addition of a technology they call VDIS, providing additional stabilisation options for video shot on the rear camera.

Samsung’s evolved the S Pen, altering the balance and adding a click action to make it feel more like a real pen, which also aids with getting the pen out of the storage area. The Air Command on-screen helper has also evolved into a floating, “chat head”-style icon that hangs around on the screen and is far less obtrusive than we’ve seen in years past.

Every year Samsung tries to make the S Pen work a little more like a real pen, and this year the Note 5 can detect pen input while the phone’s screen is off and will send your input to the S Note app. Samsung says its changed the hardware inside the S Pen to further reduce latency on input too.

The Note 5 comes with Android 5.1 out of the box, a release we’ve been waiting to see from Samsung that’s rumoured to bring back a few features that were omitted from the 5.0 release on the Galaxy S6.

Samsung’s also let fly a bevy of product shots for Note 5 accessories, showing sparkly back covers along with flip cases, wallet cases and window covers. The rumoured keyboard accessory also made an appearance during the presentation, clipping over the bottom of the display and offering physical keys to aid text input if that’s your thing.

The Galaxy Note 5 is coming to the US on August 21 – an earlier-than-usual start for a new Note. Samsung’s Australian PR says we’ll be seeing the devices soon, but hasn’t given us a date yet:

Following the global announcement, we look forward to launching the Galaxy S6 edge+ and Note 5 in Australia soon.

That silver coloured Note 5 is a stunner.

No external SD, no IR blaster, no deal. I use these features multiple times every day. I was hoping it was all a bad dream so was waiting for the official release. I don’t understand how you can reduce the functionality of a product and declare it better. The arrogance of deciding what’s best for the end user (and the high-end user, in this case) reminds me of another smart phone manufacturer.

Not to discredit your comment, but how often are you using an infrared remote?

When I’m sitting at the dinner table, feeding my kids and I need to turn the tv off or down. Remote is on the couch.