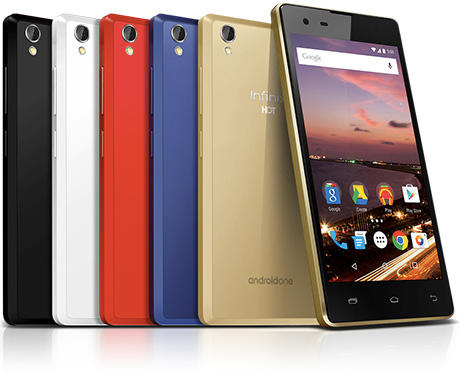 Despite a looming relaunch on the horizon in India, Google has pushed forward with their Android One handset inititiative into the African continent for the first time. Google has announced that the Infinix HOT 2 will be available in Nigeria, Ghana, Ivory Coast, Kenya, Egypt, and Morocco in the next few weeks.

The phone is available from today in Nigeria for N17,500 (around $117AUD), through select retail outlets and online through Jumia, though Jumia seems to have priced it at N19,500.

Specs for the phone are on par with what we’ve seen previously with a 5″ HD (720×1280) resolution display and are powered by a 1.3GHz quad-core MediaTek processor and 1GB memory, though the Gold coloured option has 2GB of RAM. Colour wise the phones come in Black, white, red, blue and of course Gold.

The phones are Dual-SIM as is the case with most Android One handsets, and though listed with 16GB internal storage, the option for adding a microSD card is also there, as is FM radio. The Infinx Hot 2 also comes with a relatively large 2200mAh battery onboard which Google says will be enhanced by the power sipping features in Android 5.1.1, which will of course be updated as Google releases new versions of Android.

The camera setup on the Infinix HOT 2 is improved over initial Android One handsets with an 8MP rear Camera and 2MP Selfie camera on the front.

If you’re heading to Africa, then you may want to check out the handset while you’re over there. We’re interested to see what Google intends to do with Android One in India, but the sub-US$100 price tag on the Infinix Hot 2 gives us confidence that Google really does intend to push that sub-US$50 price tag as much as possible here.