Google announced their Nearby feature for Android and iOS, which let users connect, share, and do more with people, places, and things near you back in July. Pocket Casts by Australian developers Shifty Jelly were listed as launch partners for the feature and have just advised the update is now live in Pocket Casts.

The update has launched and gives users a super-easy way to share their podcasts with other Pocket Casts users nearby. As Shifty Jelly says:


You can now open up the Nearby tab in Discover to find nearby Android Pocket Casts users (get them to do the same), and see what they’re listening to, easily subscribe and share your own subscriptions. It’s never been easier to discover great new podcasts and spread the word.

The actual usage of Nearby is delightfully simple and just works, there’s no setups or connecting to users. To try Nearby just have both users open Pocket Casts, go to the discover Podcasts section and tap on the ‘Nearby’ tab and all your podcasts are displayed in an easy to read list. The list shows you which podcasts you have in common and lists those you’re not subscribed to at the top, from there you can subscribe if you see something you like. 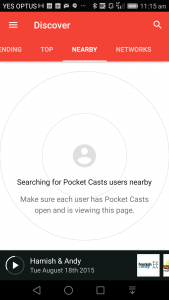 Nearby is a multi-platform API and iOS users will be getting Nearby in their Pocket Casts update down the track, and Shifty Jelly is working hard to bring it to you.

The update is now live in Google Play, so make sure you update your Pocket Casts app and then find another user to try it out with. We’ll have Philip Simpson from Shifty Jelly on the Ausdroid Podcast tonight to talk over Nearby, so if you’re interested, tune in for more.

Neat,
its a new feature… might see who else is trying it out on the train tonight

You’ll have to get them to open the ‘Nearby’ tab on their Pocket Casts app or it won’t work. #Privacy 😉

Sit next to a cute girl > see she’s using Pocket Casts > open the app > flick on Nearby > turns out she only listens to white power music and right wing talk radio.