If you haven’t heard of Google Cardboard, you’re either living in a cave, or you’re just not quite as nerdy as some of us. Whichever it is, Cardboard is kind of cool, but one thing that the viewers have lacked thus far is a cool way to hold them to your head without having to use your hands. For just $15, as you can see above, that problem has now been solved, with Kmart marketing a $15 pair of 3D VR glasses which are compatible with Google’s Cardboard specification.

Though they don’t officially go on sale for a day or two yet, we managed to find a pair in our local Kmart, and there’s plenty on the shelves. You’ll find them in the AV section — near mobiles, tablets, and video games — and they come in a fairly non-descript box the size of a box of tissues. Once you pay for them, get them home and unpack them, you’ll find a plastic arrangement inside that’s fully compatible with Cardboard, though sadly there’s no QR code to fine-tune the VR viewing experience.

We tried these goggles with the Samsung Galaxy S6, and they worked first time without a hitch, and there’s even a magnetic button on the bottom of the glasses to allow you to interact with various compatible apps. There’s really only two criticisms I have, and considering these are $15 glasses, they’re really not major issues – the first is that you can’t tune your Cardboard apps to the glasses, which means depending on your handset, you could be ever-so-slightly out of focus, leading to significant eye-strain if you use them for too long in one go. The second issue is that the phone isn’t held in all that securely; unlike Google’s Cardboard which sandwiches the phone in quite firmly between cardboard layers, Kmart’s glasses hold the phone in place with soft foam inserts and a bit of pressure from the case itself; this works fine, but it makes it a bit tricky to align the phone perfectly.

After a couple of tries, we figured it out, and you will too. I’m not sure that you’ll be making the same facial expressions as the chap in the promo material … unless you’re accompanying them with “Argh, my eyes hurt!” because you’ve used the glasses for too long … but they’re definitely a bit of fun, and the built in head-strap means you can enjoy your VR experiences 100% hands free.

Kmart probably won’t be selling them for long, so if you’re keen, best head down there soon!

Ed. Sorry the photos are so dark, it’s very dark in the office this evening! 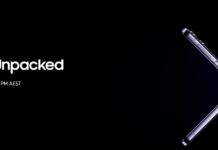 how do i get the trigger to work please help

If anyone makes a viewer profile that works well with the kmart vr headset, please post it. i cant seem to get it right >_<
Im finding that to see it clearly my phone needs to be like 5mm further away from the eye lenses

Got mine today as well. Had a quick play and for $15 it’s not a bad experience at all. The head straps work well and the overall exterior fit and finish looks good. Nexus 6 fits within it fine. The front firing speakers are amazing for this application. It does get pretty hot though when running 🙂 I don’t like the sharp L/R side divider inside it and the foam pads that are supposed to hold the phone will not last. Images are ever so slightly blurry too. Any comments on whether you think the phone needs to be further… Read more »

Got it today! I am sooo surprised how well it actually works! I mean, for $15, this is a miracle! My only complaint is that it says adjustable focus and yet I don’t know a way of doing this. I think a Google Cardboard profile for this could solve it on the software side but man sometimes things feel out of focus.
Seriously, though, for 15 bucks this is sooo worth it. It is entertaining.

Hmm, problem seem to be with the N5 the magnet button is in the wrong place and turns off the screen when you close the flap in one orientation, and just doesn’t work in the other.

Some hacking about will be required to get it working.

Just got this for father’s day and discovered this. Time to return and get a better one somewhere else.

There is no camera hole that I can see. Doesn’t that limit any use of the camera function that is possible with cardboard?

Have knife, will adapt ….

Want to see what the FoV is like compared to the Cardboard.

I also got my one today. Problem is the button is not working with S6 Edge. Is ur one working?

Why won’t Kmart be selling them for long?

It appears to be a promotional item, which suggests it might not be available for too long, but hey, if it stays on shelves, so much the better!

Can you not use the Google Viewer Profile Generator to generate an appropriate QR code for the viewer?

(I would embed the URL, but this message would never be seen then)

Any idea if this will fit a Nexus 6? I will be paying a visit to Kmart of that’s the case 🙂 Looks like there may be scope to mod it for better use.

No. It clearly states “compatible with most smartphones up to 5.3″”

The Nexus 6 DEMOLISHES that limit.

Cheers.
I didn’t see the fine print on the advert. Read the post on my phone in portrait at 5am and didn’t bother to blow the image up.

Others have said it fits.