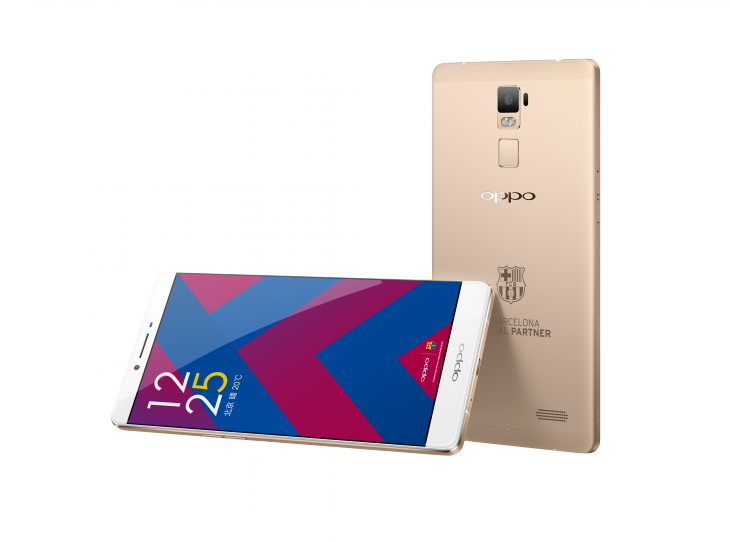 Oppo announced a few weeks ago that they’re becoming an official partner of FC Barcelona, and on Tuesday cemented the agreement with a press conference attended by FC Barcelona’s Vice President of Marketing and Communication Manel Arroyo, Oppo’s Sky Li (Vice President and Managing Director of International Mobile Business) and Alen Wu (Vice President and Marketing Director of Mainland China Mobile), at which Oppo announced a special edition of their new R7 Plus phone for FCB fans – and judging by the reactions we’ve seen to the announcement, there’s a few FC Barcelona fans out there.

Oppo’s event transformed the function space of Beijing’s Renaissance Hotel into a big football pitch, with an official Barça ball and an FCB foosball table on hand. Inside there was a dizzying number of press attendees – more than some of the launch events we attended at IFA!

The special edition R7 Plus is Oppo’s gift to FCB and its fans. The phone’s internal specs are identical to the device that’s about to go on sale in Australia, with a new FC Barcelona logo etched into the back of the phone and some additional wallpapers to give supporters that club spirit. It’ll be made available in a special edition pack along with an FCB drink flask … and a selfie stick. While the R7 Plus is just about to go on sale here, it’s been on sale elsewhere for a little over a month now, and Oppo is happy to trumpet its sales figures – over 1 million units sold in just 50 days on the market. They’re pointing to the VOOC rapid charge feature, large 4,100 mAh battery and laser autofocus RGBW camera as the standout features of the phone and say they want FCB fans to be able to capture all their favourite moments of the club’s matches with the R7 Plus’ camera.

With only 5,000 of the FCB edition R7 Plus phones available worldwide, there’s some bad news for us in this – while it’s probably not too difficult to source one online there’s a small number allocated to Australia, and they’re likely to be made available as incentives and competition prizes.

If you’re looking to get your hands on an even more exclusive version of the phone,there’s an even more special edition about to go up for sale on eBay. It’s signed by some of the FCB players, and proceeds from the sale will go to charity. Keep an eye on Oppo’s Facebook page for details.

Jason travelled to China as a guest of Oppo for this report.