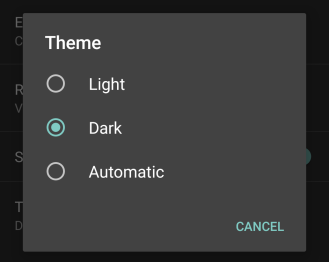 “Light themes” vs “Dark themes” – it’s an age-old battle between yin and yang, good and evil that has been (mostly) quietly raging on within the Android community for years and often sees users fiercely defending their choice. According to an issue recently closed on the Android issue tracker though, that choice is being taken away – support for dark themes in the Android 6.0 Marshmallow developer preview will not be carried over into the final release.

Hope is not lost for those of you who mourn the loss of your dark system UI. A comment made by Google engineers reads:

Thanks for the suggestion. Our development team has looked into this feature request. This will not be included in the M release. However, this may be considered for future releases.

Time will tell if this comment signifies the return of this debate to the hallowed halls of the Googleplex, or if they are merely words and the forces of light have indeed triumphed.

Where do you stand on the Light vs Dark debate? Let us know in the comments.

I’m a little surprised that my feelings on this are so vehement but… I will not use a system that will not allow a dark theme.

Another reason to use Action Launcher 3.

Why would it be such a problem to implement it?

I expect because time is finite or something. And this being very low on their list of things to get done before it ships.

Yes, someone who gets the life of a software engineer – it’s usually this!

yo
Reply to  Caleb Johns

Just going how it is on the s6, there are a few ui inconsistencies with the dark themes.

Fred
Reply to  yo

Well, if they had a properly skinable OS then they wouldn’t have the problem, and we wouldn’t have to put up with the Fisher Price ‘material design’.

Let’s face it, Marshmallow is basically fixing some of the screw ups of Lollipop, finally putting permissions properly into the OS (well I can hope), and copying apple for the useless fingerprint sensor. Nothing earth shattering. It wouldn’t have killed them to put the theme control where it belongs, with the user.