The rumoured Google event on 29 September is no longer rumoured, and it will have a unique Australian twist to it this year. Ausdroid will be in San Francisco next week, and we’ll be covering the anticipated announcement of new Nexus devices and previews of Android 6 Marshmallow live, on the ground.

Of course, while nothing is locked in, the Nexus 5X (Bullhead) and Nexus 6P (Angler) are likely to make their debut, as well as a more detailed look through the next version of Android, dubbed Marshmallow, which should drop with the release of the new Nexus phones. There’s also been a bit of rumour and talk about a follow-up device to the Chromecast being launched … so we’ll keep our eyes and ears open for that! 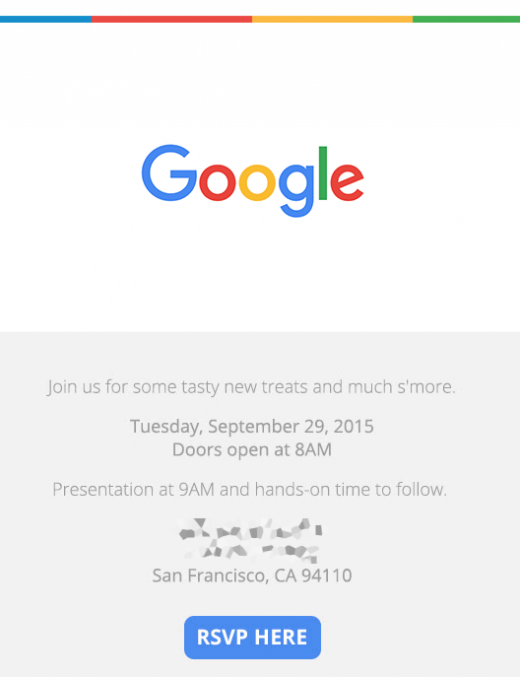 We’ll have a live blog running from about 1am Wednesday (Australian Eastern time), so I can provide updates live from the event, and we’ll have a couple of guys back here in Australia helping out as well. Hopefully we’ll get some good hands-on time with whatever they launch afterwards, and we’ll report that back to you as soon as practicable afterwards.

is there a live feed of the event online?

Really looking forward to this event – tired of Apple taking all the air and good to see Google getting its chance to ‘strut its stuff’ with lots to announce!

Have a great time guys. Hope you do a podcast from there rather than wait until you get back..

Great to see how far Ausdroid has come over the years! Looking forward to what’s announced! Sick of my Nexus 6 already!

Envious of all the fun you’ll have playing ingress in a truly big city!

No time for Ingress, this isn’t even a whirlwind visit. It’ll be a hurricane visit.

Nice going, guys. Look like you’ll need to give up your day job and become full time journalist soon.

Well done people. Perhaps I may sign up as a supporter just to toss a bit of kudos.

Going to live blog an hour before the presentation?

As in, we’ll set the live blog up and pin it, so that it’s ready to go for people to contribute to once the show starts 🙂

You’re in the big leagues now

I think 8AM SF time Tuesday is 1AM on Wednesday in Syndey.

Shouldn’t the live blog start at 1am Wednesday AEST? That’d be 8am Tuesday in San Francisco on the 29th.

You;ll be even more useless with them when you get off the plane in a different one. ;^)

Have a great trip! San Fran is an amazing place, I hope you get to see something of the city while you are there.