Google’s broken its “update Wednesday” release schedule this week, unleashing a new Android Gmail app on the world. The headline feature is a new unsubscribe/block feature, but the update also brings with it a slightly refreshed Android Wear notification card design.

The somewhat unpredictable “What’s new” section of the app’s listing says you can now “Unsubscribe from eligible bulk mailing lists directly from the message menu”. As is often the case that’s not the whole storey, the update also brings the ability to block a user from within the app. 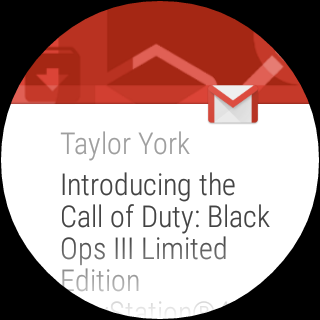 Google has added the ability to unsubscribe from “eligible” mailing lists from within the app. Unfortunately no indication is provided for what constitutes eligible so time will tell how useful this feature will actually be, especially for some of those “less legitimate” mailing lists.

In addition to the unsubscribe functionality, you can now block “disruptive” people from your email from within the app. If you find yourself in such a situation simply choose “Never see messages from this person again” and they will be gone from your inbox for good – at least while they use that email address.

The likelihood of you not having Gmail pre-installed on your phone is small, however if you don’t or you want to check out the update check out the listing below.

Which of these new Gmail features do you think you’ll get the most use from? Let us know below.

I get heaps of emails that I hive off into folders and I would like the ability to tell Wear not to notify me when one of those arrives. In practice what happens at the moment is that I keep seeing the same message alerting every time a new sub-folder message arrives.

I wonder if it is smart enough to look for the word “unsubscribe” embedded in a hyperlink. And if so, will bulk mailers start playing tricks to prevent it.
“unsûbscrïbe”

Often you have to take a further step after clicking that link.