Home News and Editorial Ausdroid visits Oppo, part 2: See how phones are made in the... In the first part of our visit to Oppo, we talked about scale – the scale of the company’s operations in China, and the size and opportunity of the Chinese market itself. We also met with some of Oppo’s product managers and designers and found out about what makes the company tick at the product level. With the office tour and interviews done, it’s time to take a look at the other side of the business, with a tour of Oppo’s factory – well, some of it – in the manufacturing area of Shenzhen, known as Dongguan.

The bus ride from Guandong takes the better part of an hour, a good reminder of Shenzhen’s size and the dichotomy that exists between the city’s office buildings and the factories. It’s a separation that doesn’t always exist in some cities in China – Beijing is famous for questionable air quality ostensibly caused by the amount of factories and manufacturing that happens on the city’s doorstep. China, and especially Shenzhen, is where some of the world’s biggest products are manufactured and the signs we pass on the way to Oppo’s facility are noted.

We also drive past a couple of Oppo’s retail stores on the trip, giving us a look a their retail and promotional signage. A number of us on the tour wonder if the bus route was planned to pass these stores on purpose, but such cynicism is probably not warranted – it’s worth remembering that the company operates some 3,000 retail stores in China, making it a statistical likelihood that we’ll go past a store or two as we drive through Shenzhen, a city with a population of 10 million people. Eventually we pull up at an area that looks more like a campus than a factory. Oppo’s production facilities lie on an area of land that’s notable for the amount of grass and trees you pass on the way in, neatly obscuring the size and number and size of buildings that make up the combined factory and dormitory facilities where Oppo’s products are made.

Today we’re visiting Oppo’s surface mount facility. It’s not a complete start-to-finish tour of Oppo’s production and assembly lines, but it’s still an interesting spectacle to see, and its at the heart of Oppo’s phone production with lots of motherboards, components, chips, and solder all around us. Later we’ll be treated to a tour of Oppo’s testing facilities, where some we’ll see devices put through some frankly brutal paces – all in the name of durability and quality. That’s a post for another time, though. If you’ve ever wanted to know what goes into making a phone, here’s your chance to get a look at the process. There’s one irreplaceable component that goes into manufacturing phones – people. Oppo’s surface mount facility has some 2,500 staff on the job at any one time and the factory as a whole employs around 20,000 people. It operates day and night, churning out a staggering 4 miliion handsets per month.

The surface mount facility is in the first of the main large buildings (left to right), and our reception is in the smaller building in front of it. Like many Chinese factories, there’s an onsite dormitory (the buildings shown at the left of the model above) and a number of facitilies are provided for the staff that live onsite. Also notable? There’s a large number of women working on the production floor of the surface mount facility, making me wonder whether gender imbalance is a thing here or not.

Before we can set foot on the surface mount facility floor, our group checks its bags in a locker area and we’re all given neat blue plastic bags to cover our shoes. A US size 12 shoe is seldom seen in China, and a few worried looks are passed around amongst Oppo’s staff when they see my runners. The first plastic bags they handed out are destroyed stretching over my runners, and finally some larger fabric bags are found that can house my footwear.

At this point I was just glad we didn’t have to wear anything special onto the factory floor. Boy was I wrong. 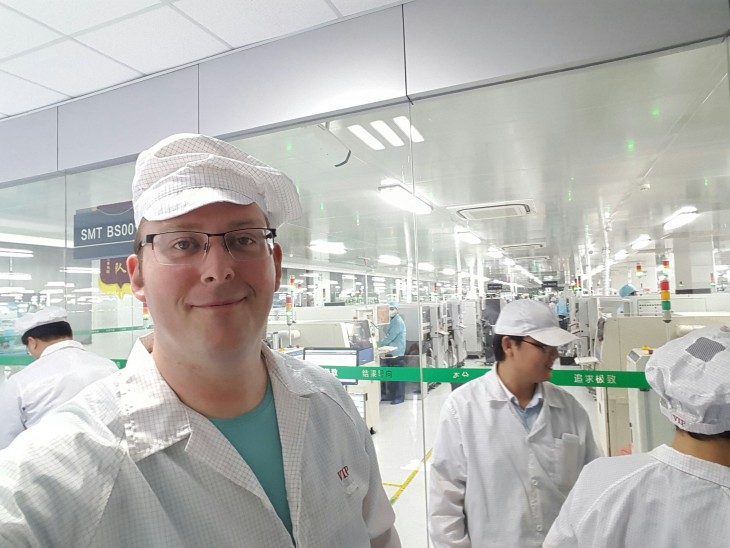 It turns out jeans, runners and a t-shirt just doesn’t cut it on the factory floor. Our new button-up jackets and hats (with a stitched “VIP” proudly adorning the left breast) are made of soft plastic, and there’s a hole in the top to stop your head from overheating.

Despite misgivings, it’s decided that this getup is probably okay, because the staff inside are similarly attired and the entire floor is climate controlled.

There’s also a pretty imposing air lock between us and the factory floor. I did feel like we might have been walking into a Dalek trap as we entered the airlock, and that we all might have been about to be vaporized.

Thankfully, the vents blew some air on us and we went on through.

Oppo’s factory staff are keen for us to know that the machines on the floor are all considered to be at top level of industry – that is to say, they’re best-in-class. Oppo’s not shy of getting the best of the best machinery in if it means a better outcome for production, either in terms of speed or quality.

As we walk through the surface mount facility, there’s a number of machines on our left that are responsible for the production of phones while on the right there’s a huge number of benches with electrical and electronic testing equipment to make sure that the boards produced in the facility are operational and working properly. There’s a lot of human oversight at each stage, but machines help along the way with a number of sensors along the way detecting things like faulty soldering jobs and more.

The main focus of our look today is a row of machines that’s producing the R7, one of Oppo’s newest phones that’s currently in a number of our pockets as we tour the facility.

It starts with a connected block of some 6 motherboards fed into a machine that adds solder at a number of predetermined places on the board. Nothing is actually soldered in place yet, but the solder is placed where it’s needed.

The output from this machine is checked over by another, that simply pronounces the application of solder to be “GOOD” or “BAD” based on a detailed scan of the motherboards as they pass between them. This part is overseen by a human who’ll take action when the scanner pronounces a solder job to be “BAD”.

The mounter is – you guessed it – responsible for mounting chips onto the motherboard. Chips are fed into the machine on the ribbon-like streams you can see moving into the front, and up to 24 suckers within the machine are responsible for placing the chips where they need to go. It’s stressed to us that the mounter is a Japanese machine, and it operates with 0.02mm precision to be sure that the chips go exactly where they need to go.

As before, there’s a second machine that checks the quality of output from the first – the Spectro checks to ensure that the chips are placed correctly before the solder is melted and it’s all set in stone. If there are any failures detected, there’s once again a human standing by to manually check things over and see whether the board is okay to proceed.

Finally, the board is passed through a massive baking machine that melts the solder into place – everything is now, finally, properly mounted onto the motherboard. The finished product is sent to staff at the end of the production line for manual inspection, to make sure everything is properly set and soldered into place.

All in all, this process takes about 15 minutes start to finish. That’s not the end of it though – motherboards these days have two sides, and once it passes the manual inspection where we’re standing at the end of the line the process begins all over again for the other side of the motherboard. There’s a different set of chips to be mounted on a different set of solder points, but the process is much the same.

From there, the larger board is cut into its six individual boards then it’s over to the other side of the room where the electrical side of the finished product is tested to make sure that the right current flows around the right parts of the circuit board and that it’s properly operational and ready to power a shiny new Oppo R7.

From the surface mount facility, it’s off to the assembly area with all the finished boards. Sadly, the assembly area isn’t open to the media but we saw a big number of finished R7 and R7 Plus phones later in the afternoon in our final stop, and the final part in our series – Oppo’s quality control lab.

Jason travelled to China as a guest of Oppo for this series of articles.

Really interesting articles. I’m impressed by Oppo’s facility, but the assembly area being closed off to the media makes me wonder if they are hiding a sweatshop (especially since there’s definitely no where near 2500 people working in the surface mount facility you toured). Either way, what they did show is impressive. And of note is they are using Win7 instead of XP!
Thanks for the write up of this! Really enjoyed it.

The employees look fattened up.

The visible parts of the facility don’t look like a sweatshop.

Nice article. Really amazing how far we have come in the past 50 years or so with electronics production.