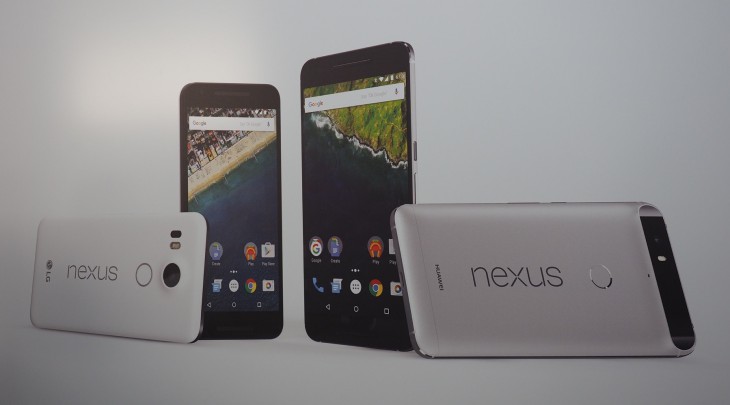 SAN FRANCISCO: If you’re just waking up, Google has unleashed a slew of new devices this morning, and the two headlines are the Nexus 5X from LG, and Nexus 6P from Huawei. Before we jump into the phones in more detail, we’ve also seen the launch of the new Chromecast, Chromecast Audio for speakers and new Google Photos and Google Play Music service offerings.

The Nexus 5X truly feels like a worthy successor to the Nexus 5 from 2013. I think a lot of us felt let down by the Motorola Nexus 6 (sorry guys), and many opined at the time that the 5″ offering from LG the year prior was a much better all around handset.

While the early leaks and press shots had made the camera bump look quite significant, the reality is it’s tiny, probably projecting a millimetre or more from the rear case, if even that.

In the hand, the feel is very much Nexus 5 — the material is of similar feel and presence in hand, and this goes nicely with the weight and balance of the Nexus 5x; it belongs in your hand and feels great there.

Software and interface wise, the feel is very fluid; there’s no lag anywhere in the operating system during my hands-on time, and all the new features including Google Now on Tap, the new camera features and more work very well.

Nexus Imprint provides a seamless security option on both the Nexus range devices this year, and it feels very very much like the experience on Huawei’s G8 which we checked out yesterday. Registering a fingerprint takes mere seconds, and then it provides a quick and natural way to unlock the phone; with a fingerprint reader on the rear of the device just below the camera — I don’t know about you, but my hand naturally falls with an index finger near the fingerprint sensor so it’s going to take no time at all to pick up the required muscle memory.

The feel is very polished, and this applies to both models, but especially so the Nexus 6P. Let’s take a look.

If the Nexus 5X is reminiscent of LG’s last Nexus (Nexus 5), the phone most like Huawei’s Nexus 6P I would say its something like Samsung’s Note 5. As you can see from the in-hand photos, the metal band around the edge is very similar to Samsung’s design, and I have to say it definitely adds a premium feel to a Nexus device which is well overdue.

Like the Nexus 5X, there was speculation that the camera bump on the rear would be quite prominent, even unsightly, but I’m pleased to report that this really isn’t the case; in fact, it’s possibly less prominent than the Nexus 5X. Like I noted above, it follows the premium feel of the aluminium banding around the edge; it’s a premium look and feel and it’s visually striking and distinctive. There’s no way that the Nexus 6P will be mistaken for anything else, nor will anything else be mistaken for a Nexus 6P.

That, in my view, is a great thing — Huawei have really hit it out of the park in building a quality device like this, and you (as the owner of such a phone) really want to be able to show that off. Everyone else does it with their iPhones and Samsung devices, so why shouldn’t Huawei get in on that action too?

On the topic of premium, the internals of the Nexus 6P are very similar to the Nexus 5X; almost identical processor in the Snapdragon 808 on the Nexus 5X vs 810 on Nexus 6P, and 3GB of RAM vs 2GB in the Nexus 5X. With these internals, you’d expect a very similar performance, and you would not be disappointed. The Nexus 6P and Nexus 5X both scream along in terms of performance, though real-world usage may vary a little — these were phones with very little installed on them, and limited ability to install apps for our purposes.

That said, the kind of intermittent lag that you might notice on other devices was not obvious here — Android 6.0 Marshmallow looks a lot like Android 5 Lollipop, but the performance improvements under the hood are nothing to laugh at. They’re seriously quick, and beautifully smooth to use.

Ausdroid will have review devices at some stage in the next couple of weeks, so we’ll give you a more detailed hands-on soon!

As a correction, the Nexus 6P does not have a ‘metal band’ around it – the entire back and sides are aluminium (in either black, white or unpainted). The only non-metal part is the screen, camera and the small strip on the bottom of the rear (matching coloured plastic for antenna bands).

The sides just look like a separate metal band because the edges have been beveled and polished down to the bare aluminium.

So how is the photo quality?

So, Christopher. Which do you think will be in your pocket in the long term? Or would you stick with a Moto phone?

Its all personal preference, i know.

Tough call… Early thoughts are siding with Nexus 6P but I really need a more detailed and longer time with both to really decide. If I had to call it now, I’d say 6P. Slightly better in all respects, and more RAM and storage available.

My bad, I was struggling with lack of sleep when I wrote this (and narrated the videos later!). Now fixed.

How does fingerprint sensor work? Is it swipe or place your finger on the sensor? And is it responsive with low error rates?

Just rest your finger on it. No swipe or press required.

Can anyone explain the FCC external MicroSD thing that turned out to be false?

While these are nice phones, the lack of Qi wireless charging has just killed them both for me. Very disappointing indeed. I can’t believe it.

Wow the new Nexus phones sound really good. Did I hear correctly that the phones don’t have OIS and that only the bigger phone can do 240 frames per second slow motion?

Correct Geoff. OIS is done with software magic rather than hardware. The results are quite amazing.

Edit: I guess they had a pre-release model though, so it could be improved.

as much as I love clean android, with the low AU$, its going to be hard to beat the LG G4 in terms of value for money.

What colour is that nexus 6p? Did you see any of the other colours

Joshua Wenham
Reply to  Will Dutton

Would love to know this as well.

Andrew
Reply to  Will Dutton

I saw white and silver from memory.