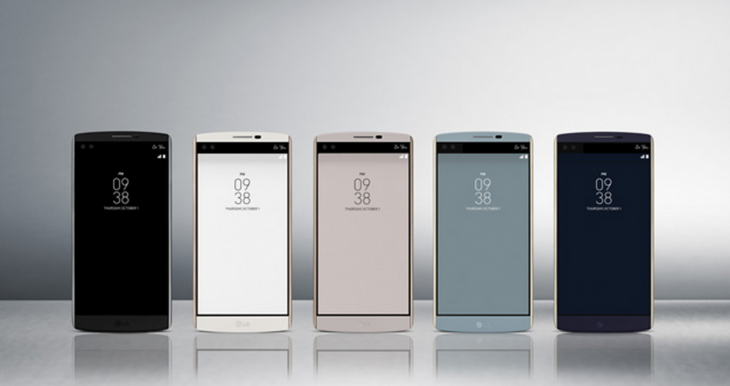 Ahead of their October 1st event in New York where it’s expected to be shown off officially, LG has taken the wraps of the dual-screen V10 phone.

LG have done some great things in the mobile device market over the last few years; their G and G Flex series as well as Nexus 4 and 5 have been successful for them and now they’d like to introduce you to the LG V10. Much like the current flagship from LG, the G4 it has a 3,000 mAh battery, a Snapdragon 808 processor and a 16-megapixel rear camera. Where the V10 differs from the G4 and other devices on the market is the second “always on” screen that resides above the 5.7″ QHD Display and the second selfie camera which has a 120 degree viewing angle for the highly important group selfies.

Full specs for the phone include :

The second screen behaves (for those of you who haven’t seen or played with one) much like the “Edge” screen on the Samsung Galaxy S6 Edge and Note Edge devices. Configurable to launch apps and display information specifically relevant to the users such as sports scores or weather it is a function that many users would likely engage. Lg have clearly been listening to criticism of some of the other current market devices; LG have a removable batter and Micro SD slot built into the device as well.

We have reached out to LG to check on availability and potential pricing within Australia and received the following statement:
‘LG Australia is currently evaluating the suitability and compatibility of this product for the local market. Further information on local availability will be provided at a later date.’
We’ll be sure to publish an update when the information becomes available, if it does make it to our shores, LG has advised they will offer the V10 in Lux white, ocean blue, beige, modern, opal blue, black space colour options. Do the new features of the V10 capture your interest, or do you believe that the focus of this device may be misdirected?

So, no phone as yet from any of the telco’s, so is there any updates as to when it will or even if it will become available in Australia? By the way things are moving, it just might be better to wait for the G5 in late Feb early March ? 🙁

I will absolutely buy two of these if the V10 is released in Australia. In a sea of disappointing flagships this year, this is the only phone that appears to tick all the boxes and more. Removable battery, expandable storage, excellent camera, 4GB RAM. I’ve been out of contract for 6 months now and, even though I have to carry two phones around because my S4 is all-but-dead, I’m refusing to get another phone until the right one comes out. This looks like the one. Aghhh, please release it here!

Had every Note (including the Edge) until Sammy screwed the pooch with the 5. I’d buy this immediately if it comes to Au.

I was looking forward to hearing about this but at 5.7″ it’s too damn big!

I gotta say I love the higher quality materials, if the G4 looked like that I may have chosen it over the Galaxy S6.