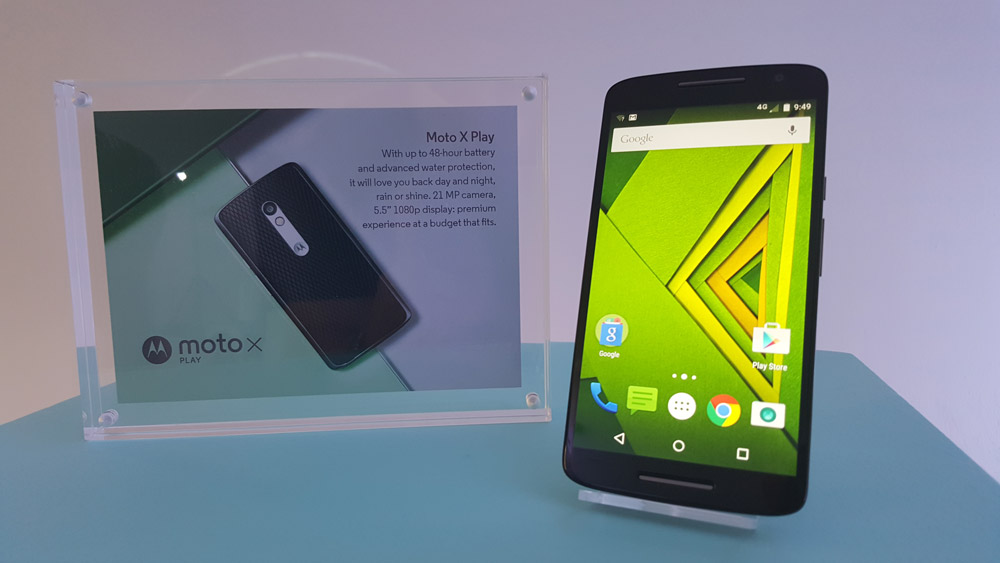 Expansys have announced an offer today on the Moto X Play from Motorola; not currently available outright in Australia (unless Vodafone feel especially generous), if you’re keen to get your hands on one you have to wait for Motorola to get them into retail stores … or you could buy one online, today (or any day until the 12th October) for just $464.99 for the white model, 16GB, unlocked.

It isn’t immediately clear whether this is the dual-SIM or single-SIM variant, but the model number (XT1562) is the same as what’s sold here, so band compatibility shouldn’t be an issue.

On top of this, Expansys has a special offer on the Moto G (3rd Gen) which you also can’t buy in Australia yet — it’s available online for the next 24 hours or so at just $273 for the XT1541 Unlocked LTE, 8GB Black model. Do note, though, that this is NOT the same model that will be sold here; Motorola will have the XT1550 model on sale here, which has 16GB storage, and should be (our review unit was, at least) dual-SIM.

This model, as our readers have pointed out, lacks the 3G/850 band (which users of Vodafone and Telstra will probably want), as well as LTE band 28 (which Telstra and Optus users would want). If wide 4G compatibility is your thing, then the XT1541 on sale at Expansys is probably worth avoiding. Even if you don’t care about 4G so much, this mightn’t be a great option, as 3G/850 provides pretty great coverage, especially for Telstra users, and without it, coverage won’t be great.

If you’re keen, hurry over, these deals won’t last long. The Moto X Play is a great offer. The Moto G 3rd Gen, not quite so much.

Thanks readers for pointing out a few things about the XT1541 which I’d overlooked!

I really hope we will be getting the 2GB/16GB Moto G (3rd Gen) variant in Australia… Pretty sure I am going to get one, now that the 2015 Nexus phones have been released (with their ridiculous price points).

It’s the single sim version listed above, BUT they do have the dual sim version. Have a look at the comments on that page – someone’s already asked the question and got an answer from them.

Yep – this is not the Moto G for the Australian Market.

My bad, screwed up. Fixed it! Thanks guys.

Wait? The 8GB Moto G will be sold here? I thought we were getting the 16GB/2GB variant?