Google’s eponymous app was updated earlier this week, and the folks at Android Police have been able to delve into the update further and find out what Google have packed into the latest update, which takes the app to version 5.4, addressing some bug fixes and including some new features along the way.

First off, the previous animation which was at best a bit screwy has been fixed and restored to its original design. There is also a new and more convenient way to set Home and Work locations. There also seems to be a suggestion that the Google app will play host to its own mini-app for Android Wear.

So here is the full rundown of what the app update provides:

The previous version of the app introduced a bug into the Google Now stream. This bug – a design bug at best – revealed a dark grey box anytime a card was swiped away. This box always remained in place until its card was fully dismissed, at which point the grey box just simply disappeared and the cards below it were shifted up to the space the grey box originally was. The latest release fixes this design flaw and restores the behaviour of older and previous versions of the app. 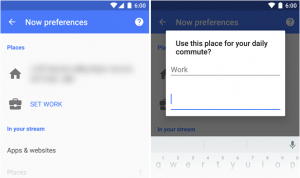 A new feature of the update is customise and set the location of your home and work locations at the top of the screen. Whilst really this setting isn’t new and has been a part of the Google Maps service, the update addresses Google’s estimating and calculation for commute times and accident reports. It would seem users were a little confused about how and where to set these fields within the app, so Google has now put them in front and centre for easy access.

The guys at Android Police have found that Google have placed a new file under the name of “wear_app_desc” which appeared under the /xml folder. This file is used to determine if a particular APK should be installed to a paired Android Wear device. When looking into the file, it would seem that the contents of the file are useless for conveying what the app would do. There is also no micro-apk to examine or install.

According to the post, the only other reference to the Wear app, seems to somewhat appear in various strings where a “capability” of the app is described as a “card sync provider”

It seems that this app will eventually take over the responsibility for the card stream on Wear, which was previously included with the firmware for each watch. It would seem that with this change it would mean that Google wouldn’t have to roll out firmware updates to just change the card stream behaviour. Furthermore things like speech recognition and Smart Lock functions may also be covered under this update.

For now we will just have to wait and see what Google does going forward, but it is expected to see an update when Wear devices receive will begin to see a rollout of Android 6.0.

For now if you wish to take a look at the update and install it on your device manually, the guys at Android Police have got an APK file for you to side load onto your device.

+1 for linking AP for the APK, rather than the “rolling out soon/now”