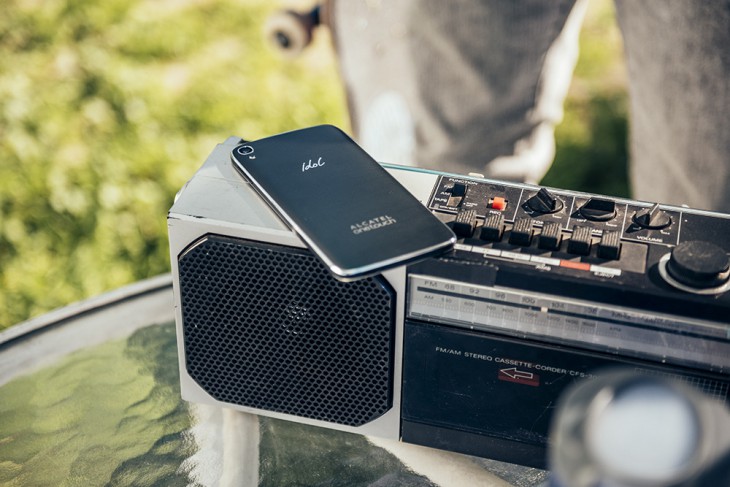 Alcatel OneTouch today announced local availability of its Idol 3 and Quatro 4G phones at $379 and $99 respectively, along with a new sponsorship deal with Australian Ironwoman Tara Coleman.

The Idol 3, first revealed earlier this year, has taken its time coming to Australia but Alcatel OneTouch feels they have the right launch partner for the device in Dodo Mobile.

The phone speaks to Alcatel’s younger demographic offering features like the 13MP camera powered by Sony hardware, JBL speaker hardware with DJ software and Technicolor-tuned 5.5 inch 1080p screen. It’s also fully reversible, with microphones and speakers at either end of the phone so “upside down” is only a matter of the way you look at it.

The Idol 3 is one of the phones we’ve been looking forward to all year. It’s not hard to draw comparisons to the Nexus 4 in terms of looks, but we’re impressed with the number of features packed in at the price, really making a com. It’s finally hitting Dodo retail stores and online in early November at $379.

If you’d like a refresher on just how good a $379 phone can be, check out our review.

Alcatel OneTouch is bringing the Quatro 4G to Boost Mobile as its first 4G phone, with a 4.5 inch screen and full 4G capabilities.

The phone continues Alcatel OneTouch’s goal of making technology accessible to everyone at affordable prices. It’s powered by a quad core Qualcom Snapdragon 410 with 8GB storage built in and a Micro SD card expansion. There’s a 5MP rear camera and a VGA front camera.

The Quatro 4G is priced at a wallet-friendly $99 mark in a sleek silver casing as Boost moves to establish its new 4G network capabilities and is available now.

Finally, Alcatel announced its sponsorship with Australian Ironwoman Tara Coleman. At just 24 years of age, Tara is a veteran of the Ironwoman circuit having competed in the Nutri-Grain Ironwoman series for the past six years, and this summer she’ll be competing in both the Nutri-Grain events and the Summer of Surf tournaments.

Alcatel OneTouch Regional Managing Director Sam Skontos said that Tara “continues to be an idol, role model and inspiration to many young Australians”, adding that she brings Alcatel OneTouch’s brand values to life in a very real and quintessentially Australian way. Will the Idol 3 come with the JBL headphones in Australia?