Home Mobiles Carriers Optus to have the Nexus 6P on sale from 2 November, pre-sale... 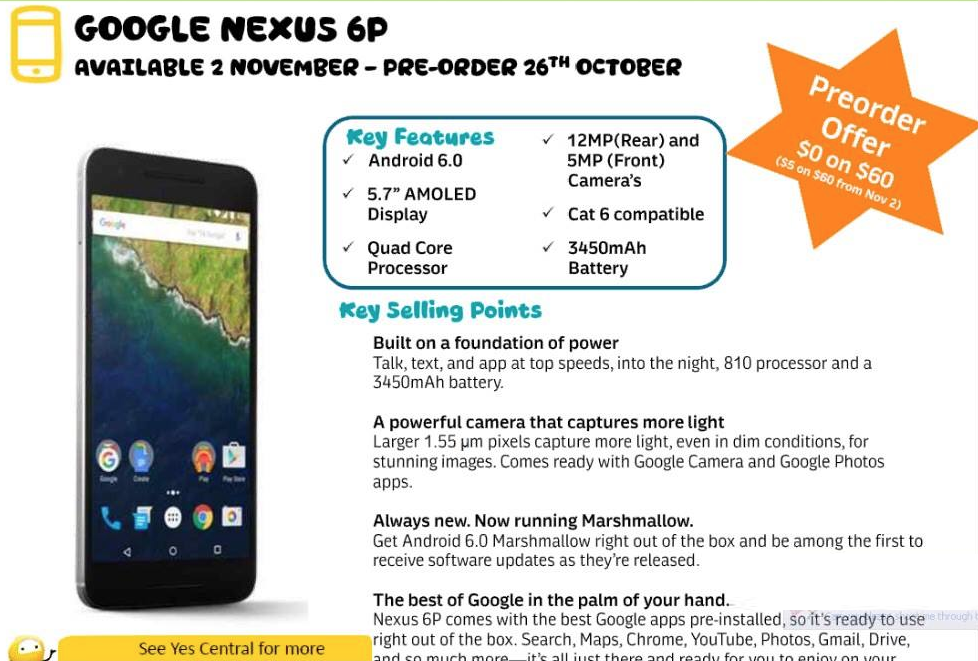 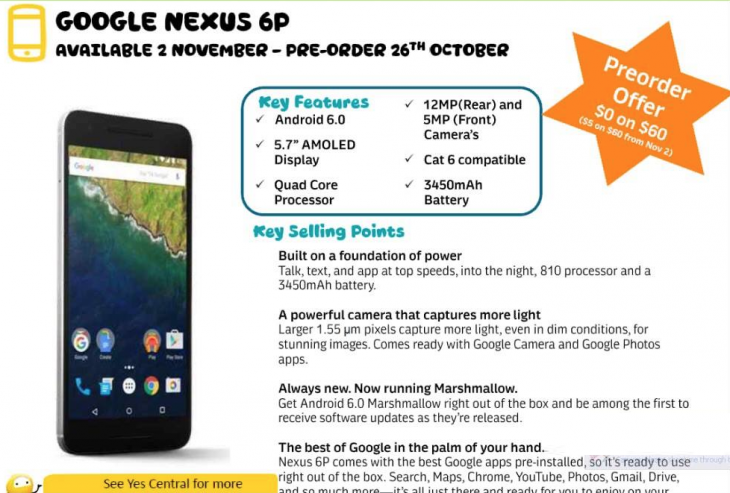 It looks like someone at Optus has been screen-grabbing upcoming releases, and this time its a doozy; according to this information, the Nexus 6P will go on sale at Optus on 2 November (just under two weeks), with pre-sale commencing on 26 October.

We all know the features of the Nexus 6P, so I won’t repeat those here, but the pricing information is useful – Optus will offer the Nexus 6P for $0 on a $60 plan as a special pre-order promotion, and from 2 November, it’ll jump to $5 on the $60 plan. There’s no outright pricing mentioned, and that’s not surprising given Optus is unlikely to sell it outright (initially, at least).

However, we do know that Optus sells the iPhone 5S (retail price $749) on the $60 plan for $7 a month, which puts the outright price for the Nexus 6P at $5 a month likely under that $749 price tag. This is odd, because what we’ve seen thus far indicates a price around the $899 mark.

We’re looking into this further and we’ll bring more when we’ve got it.

Just ordered Nexus 6p with Optus Sales team on phone.. They have only Silver 32GB in store from Google. Plan is $60 with no phone cost…

no 64gb of 128gb? of course not its a carrier they think people are idiots and only use 32gb on there smartphones.

seriously? nothing from Telstra the best mobile network in Australia? and no outright price seriously?

Vodafone having pre order 26th as well. Just got confirmation from them on twitter.

Pre order 9am on the 26th available on the 2nd of Nov. Your welcome kiddies sadly only 32gb..

Did this come from a support rep or something? Thanks for the info man! I’m really curious about whether they’re selling outright… Don’t think I’m that keen to go on a plan.

What really throws a spanner in the works is the fact that the $50 BYO plan is the same as the $80 Phone plan. Which means on that plan, any device has a minimum effective cost of $720.

I know it’s a nexus, bit can we confirm that the OS will be 100% pure stock and no carrier meddling?

And will optus withhold system updates for “testing” like Telstra does?

It seems unlikely Optus would do that. Equally, there’s easy ways around it, so worst case scenario you won’t miss anything.

Noooooooooo…. I swore off Optus 3 years ago after not being able to use the data even despite having full signal so often (and never looked back) but if they really have it on a $60 plan with no extra payment with 3GB data and unlimited calls and texts I might just break again!?!?

dude Optus now days doens’t even compare to optus 6months ago – they are by far the leading carrier in Aus currently, best speeds and coverage on 4g from my testing. and no other carrier can compare in data deals also

Spoke to a Huawei rep today, expect to see 64gb 😉 Unfortunately no word on pricing..

Doesn’t the N6P have an 8MP front facing camera?

Optus is probably getting the phone from Kogan.

hahaha good one mate hehe I think so to. ignore any one that can’t take a joke.

Any news if Telstra are going to be offering it too?

It seems likely, but we have no confirmation from Telstra at this stage.

Thanks Chris. I rang Telstra after posting and was informed that they have nothing listed in their system yet, but will be offering it once available. Here’s hoping!

Went to a Huawei Telco event last night and the word on the ground was that Telstra isn’t playing ball with Huawei and wants to price it like an iPhone/Galaxy S6 which is fair in all honesty but i dont think Huawei want that from carriers. Vodafone and Optus were confirmed to be carrying the 6P and apparently from what a few Huawei execs told me Telstra will have the 5X exclusive.

What does “Cat 6 Compatible” under Key Features mean?

After reading all the reviews for this over the last couple of days, I’m really thinking of going back on a plan with Optus. Haven’t bothered with plans since I was painfully singed by Vodafone a few years ago.

In the same boat. Even using a cheap prepaid sim like Lebara costs 30$ a month for the same benefits as this optus plan, making the phone cost around $720. $180 less than assumed RRP.

Telstra delayed updates for nexuses too.

Makes sense. Cases for the 6P start shipping on Google Play from the 26th too so I guess that’s the day it goes live here!

There’s other things happening on the 26th too .. all of which point in this direction.

I hear there is an Event at Google next Monday. Is this what your refering too?

I wonder if updates will have to go through optus though?

One hopes not .. in any event, you can just flash factory images without wiping to get updates straight away regardless of carriers.

Thanks Chris, I had thought but wasn’t sure 🙂