Do you know what your kids are up to? Do you know who they’re talking to, what they’re doing and, at if they’re not at home – where they are? As a parent in today’s society there is a very fine line to walk between watching, caring for and ensuring your kids are safe versus being a fun sponge and preventing your kids from being kids.

A new app called Thread has launched on the Play Store and iOS from the Carly Ryan Foundation promising a closed loop instant messaging platform that can track locations, set check in deadlines and – in case of distress – alert family, carers and police at the touch of a button. 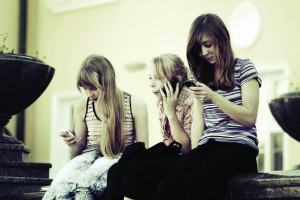 It would be remiss to not mention the story of Carly Ryan whose name is carried on by the Carly Ryan Foundation.

In 2006 Carly Ryan thought she had met her dream boyfriend online. His name was Brandon Kane, a 18yr old musician from Melbourne. Brandon was in fact fictitious. An internet construct, the cyberspace alter ego of Gary Francis Newman, a 50yr old predator and paedophile. Carly fell in love with the Brandon construct during 18 months of online contact and phone calls.

Gary Newman spent months masquerading as Brandon Kane to win Carly’s love. When he tried to seduce her in person pretending to be Brandon’s father “Shane”, she rejected him. Angry, Gary Newman returned to Melbourne vowing to “fix Carly up.” He used his alter ego to lure Carly to a final, fatal meeting.

For any parent of children old enough to engage in online chats, that all sounds very scary and frankly it is.

Thread opens possibilities allowing parents peace of mind by having a “check in” that notifies anyone in the thread of your child’s safety without needing to set deadlines (of course, deadlines can be set if needed). Thread can help to build a relationship between parents and children based on trust rather than making the parents feel like overbearing ogres.

As someone who was involved with the search for Carly, I’m happy to see that something so positive has come from such a devastating time for her family.

You can find out more about the Foundation and make a donation at the Carly Ryan Foundation website.

Would you utilise an app like Thread? How do solve issues of privacy versus safety for your children?

Keeps crashing on 2 of my Nexus 5 Marshmallow phones.